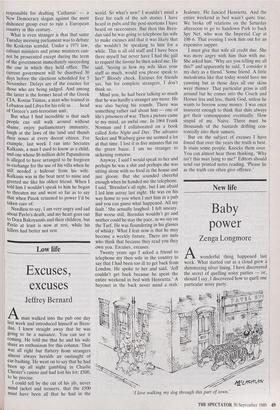 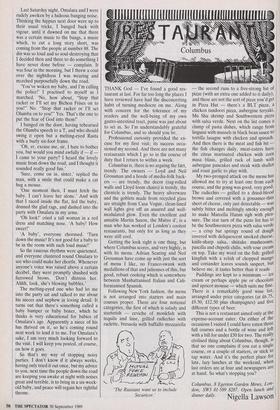 Awonderful thing happened last week. What started out as a cloud grew a shimmering silver lining. I have discovered the secret of quelling noisy parties — or, should I say, I discovered how to quell one particular noisy party. Last Saturday night, Omalara and I were rudely awoken by a hideous banging noise. Thinking the hippies next door were up to their usual tricks, I banged back with vigour, until it dawned on me that there was a certain music to the bangs, a music which, to cut a long story short, was coming from the people at number 88. The din was so loud and so soul-destroying that I decided then and there to do something I have never done before — complain. It was four in the morning, but I threw a coat over the nightdress I was wearing and marched purposefully down the road.

I banged on the door, having rehearsed the Olumba speech to a T, and who should swing it open but a melting-eyed Rasta with a burly six-foot frame.

`Oh, er, excuse me, sir, I hate to bother you, but would you mind awfully if — if I came to your party? I heard the lovely music from down the road, and I thought it sounded really good fun.'

`Sure, come on in, sister,' replied the man, with a smile that could make a cat hug a mouse.

`One moment then, I must fetch the baby. I can't leave her alone.' And with that I raced inside the flat, fed the baby, donned the glad rags, and dashed into the party with Omalara in my arms.

`Oh look!' cried a tall woman in a red dress and matching nose. 'A baby! How sweet!'

'A baby', everyone chorused. 'Turn down the music! It's not good for a baby to be in the room with such loud music!'

So the raucous rhythms were quietened, and everyone clustered round Omalara to see who could make her chortle. Whenever anyone's voice was raised above a certain decibel, they were promptly shushed with furrowed brows. 'Don't distress her. Ahhh, look, she's blowing bubbles.'

The melting-eyed one who had let me into the party sat and talked to me about his nieces and nephew in loving detail. It turns out that there's something called a baby bumper or baby boxer, which he thinks is very educational for babies of Omalara's age. Apparently a niece of his has thrived on it, so he's coming round next week to lend it to me. For Omalara's sake, I am very much looking forward to the visit. I will keep you posted, of course, on how it goes.

So that's my way of stopping noisy parties. I don't know if it always works, having only tried it out once, but my advice to you, next time the people down the road are keeping you awake at night with noises great and terrible, is to bring in a six-week- old baby, and peace will regain her rightful throne.