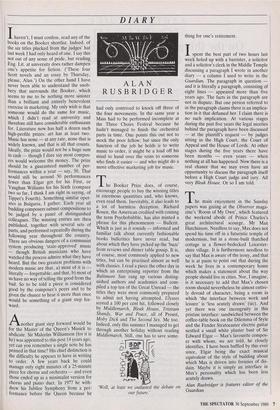 Ihaven't, I must confess, read any of the books on the Booker shortlist. Indeed, of the six titles plucked from the judges' hat last week I had only heard of one. I say this not out of any sense of pride, but reading Eng. Lit. at university does rather dampen one's appetite for fiction. (`These four Scott novels and an essay by Thursday, please, Alan.') On the other hand I have never been able to understand the snob- bery that surrounds the Booker, which seems to me to be nothing more sinister than a brilliant and entirely benevolent exercise in marketing. My only wish is that someone would do the same for music, which I didn't read at university and therefore still have considerable enthusiasm for. Literature now has half a dozen such high-profile prizes: art has at least two. Music has none — at any rate, none that is widely known, and that is all that counts. Ideally, the prize would not be a huge sum in cash — though I dare say most compos- ers would welcome the money. The prize should be a guaranteed number of per- formances within a year — say, 50. That would still be around 50 performances fewer than Elgar got for his First, or Vaughan Williams for his Sixth (compare two so far, I think I am right in saying, of Tippet's Fourth). Something similar oper- ates in Bulgaria, I gather. Each year all budding composers submit compositions to be judged by a panel of distinguished colleagues. The winning entries are then published, together with several sets of parts, and performed repeatedly during the following year throughout the country. There are obvious dangers of a communist system producing 'state-approved' music — though British musicians who have watched the process admire what they have heard. But the two greatest problems with modern music are that, a) most of it is — literally — forgettable; and that, b) most of us have no way of telling the good from the bad. So to be told a piece is considered good by the composer's peers and to be given the chance to hear it more than once would be something of a giant step for- ward.

Another giant step forward would be for the Master of the Queen's Musick to abdicate. Sir Malcolm Williamson (for it is he) was appointed to this post 14 years ago, yet can you remember a single note he has penned in that time? His chief distinction is the difficulty he appears to have in writing to order. A few years back he could manage only eight minutes of a 25-minute piece for chorus and orchestra — and even those ended up as a minimalist version for chorus and piano duet. In 1977 he with- drew his Jubilee Symphony from a per- formance before the Queen because he had only contrived to knock off three of the four movements. In the same year a Mass had to be performed incomplete at the Three Choirs Festival because he hadn't managed to finish the orchestral parts in time. One points this out not to mock the poor fellow; but since the only function of the job he holds is to write music to order, it might be a load off his mind to hand over the reins to someone who finds it easier — and who might do a more effective marketing job for music.

The Booker Prize does, of course, encourage people to buy the winning titles in enormous quantities and, who knows, even read them. Inevitably, it also leads to a lot of harmless deception. Richard Rosen, the American credited with coining the term Psychobabble, has also minted a phrase for this phenomenon — Bullcrit. Which is just as it sounds — informed and familiar talk about currently fashionable books bullcritics have never read, but about which they have picked up the 'buzz' from reviews and dinner table gossip. It is, of course, most commonly applied to new titles, but can be practised almost as well with classics. I read a piece the other day in which an enterprising reporter from the Baltimore Sun rang up various disting- uished authors and academics and com- piled a top ten of the Great Unread — the titles they were most commonly prepared to admit not having attempted. Ulysses scored a 100 per cent hit, followed closely by Middlemarch, Bleak House, Tristram Shandy, War and Peace, all of Proust, Moby Dick and The Second Sex. Me too. Indeed, only this summer I managed to get through another holiday without reading Middlemarch. Still, one has to save some- `Well, at least we outlasted the debate on our future.' thing for one's retirement.

Ispent the best part of two hours last week holed up with a barrister, a solicitor and a solicitor's clerk in the Middle Temple discussing a paragraph I wrote in another diary — a column I used to write in the Guardian. The paragraph in question and it is literally a paragraph, consisting of eight lines — appeared more than five years ago. The facts in the paragraph are not in dispute. But one person referred to in the paragraph claims there is an implica- tion in it that defamed her. I claim there is no such implication. At various stages during the past five years the legal niceties behind the paragraph have been discussed — at the plantiff's request — by judges sitting in the High Court, the Court of Appeal and the House of Lords. At other stages during the five years there have been months — even years — when nothing at all has happened. Now there is a real chance that we may even have an opportunity to discuss the paragraph itself before a High Court judge and jury. All very Bleak House. Or so I am told.

The main enjoyment in the Sunday papers was gazing at the Observer maga- zine's 'Room of My Own', which featured the weekend abode of Prince Charles's great architectural scourge, Mr Max Hutchinson. Needless to say, Max does not spend his time off in a futuristic temple of modernism, but in a stone-built thatched cottage in a flower-bedecked Leicester- shire village. It is furthermore needless to say that Max is aware of the irony, and that he is at pains to point out that during the week he lives in a contemporary home which makes a statement about the way people should live in cities. Nor, I imagine, is it necessary to add that Max's chosen room should nevertheless be almost entire- ly devoid of character, being a room in which 'the interface between work and leisure' is 'less acutely drawn' (sic). And yet there was one incongruity in this pristine interface: sandwiched between the coffee-table book on the Dilemma of Style and the Fender Stratocaster electric guitar nestled a small white plaster bust of Sir Edward Elgar — Max's favourite compos- er with whom, we are told, he closely identifies. I have been baffled by this ever since, Elgar being the exact musical equivalent of the style of building about which Max is driven into frenzies of dis- dain. Maybe it is simply an interface in Max's personality which has been less acutely drawn.

Alan Rusbridger is features editor of the Guardian