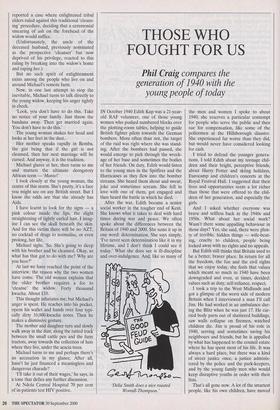 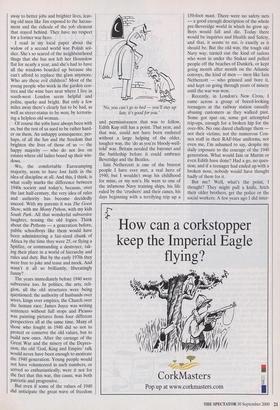 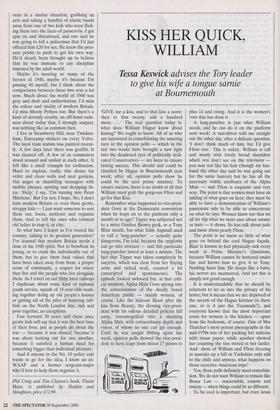 THOSE WHO FOUGHT FOR US

Phil Craig compares the generation of 1940 with the young people of today IN October 1940 Edith Kup was a 21-year- old RAF volunteer, one of those young women who pushed numbered blocks over the plotting-room tables, helping to guide British fighter pilots towards the German bombers. More often than not, the target of the raid was right where she was stand- ing. After the bombers had passed, she would emerge to pick through the wreck- age of her base and sometimes the bodies of her friends. On duty, Edith would listen to the young men in the Spitfires and the Hurricanes as they flew into the bomber streams. She heard them shout and swear, joke and sometimes scream. She fell in love with one of them, got engaged and then heard the battle in which he died.

After the war, Edith became a senior social worker in the tougher end of Kent. She knows what it takes to deal with hard times during war and peace. We often spoke about the differences between the Britain of 1940 and 2000. She sums it up in one word: determination. She says simply, `I've never seen determination like it in my lifetime, and I don't think I could see it today.' What she does see is ill-discipline and over-indulgence. And, like so many of Delia Smith does a nice roasted Worrall-Thompson.' the men and women I spoke to about 1940, she reserves a particular contempt for people who serve the public and then sue for compensation, like some of the policemen at the Hillsborough disaster. She experienced far worse than they did, but would never have considered looking for cash.

I tried to defend the younger genera- tions. I told Edith about my teenage chil- dren and their bright, perceptive friends, about Harry Potter and skiing holidays, Eurocamp and children's concerts at the Royal Festival Hall. I suggested that their lives and opportunities seem a lot richer than those that were offered to the chil- dren of her generation, and especially the girls.

And I asked whether everyone was brave and selfless back in the 1940s and 1950s. What about her social work? Wasn't there some appalling behaviour in those days? Yes, she said, there were plen- ty of terrible, hidden things — wife-beat- ing, cruelty to children, people being locked away with no rights and no appeals.

But Edith still thinks that Britain used to be a better, braver place. In return for all the freedom, the fun and the civil rights that we enjoy today, she feels that values which meant so much in 1940 have been downgraded and even, at times, derided: values such as duty, self-reliance, respect.

I took a trip to the West Midlands and got a glimpse of the worst side of modern Britain when I interviewed a man I'll call Jim. He had worked in an ambulance dur- ing the Blitz when he was just 17. He car- ried body parts out of shattered buildings, saw walls collapse on firemen, watched children die. Jim is proud of his role in 1940, serving and sometimes saving his neighbours and friends, but he is appalled by what has happened to the council estate where he has spent most of his life. It was always a hard place, but there was a kind of street justice once, a justice adminis- tered by the police and the park-keepers, and by the young family men who would keep disruptive youths in order with their fists.

That's all gone now. A lot of the smartest people, like his own children, have moved away to better jobs and brighter lives, leav- ing old men like Jim exposed to the harass- ment and the ridicule of the yob element that stayed behind. They have no respect for a former war hero.

I read in my local paper about the widow of a second world war Polish sol- dier. She's so scared of the neighbourhood thugs that she has not left her Hounslow flat for nearly a year, and she's had to have all the windows boarded up because she can't afford to replace the glass anymore. Who are these evil children? Most of the young people who work in the garden cen- tres and the wine bars near where I live in south-west London seem helpful and polite, sparky and bright. But only a few miles away there's clearly fun to be had, as well as street-status to be won, by terroris- ing a helpless old woman.

Of course the yobs have always been with us, but the rest of us used to be rather hard- er on them. An unhappy consequence, per- haps, of all the fun and the freedom that brighten the lives of those of us — the happy majority — who do not live on estates where old ladies board up their win- dows.

We, the comfortable Eurocamping majority, seem to have lost faith in the idea of discipline at all. And this, I think, is what really marks the difference between 1940s society and today's, because, over the last half-century, the very idea of rules and authority has become decidedly uncool. With my parents it was The Goon Show, with me Monty Python, with my kids South Park. All that wonderful subversive laughter, teasing the old fogies. Think about the Pythons — a generation before, public schoolboys like them would have been administering a fair-sized chunk of Africa by the time they were 25, or flying a Spitfire, or commanding a destroyer, tak- ing their place in a world of hierarchy and rules and duty. But by the early 1970s they were free to joke and tease and mock. And wasn't it all so brilliantly, liberatingly funny?

The years immediately before 1940 were subversive too. In politics, the arts, reli- gion, all the old structures were being questioned: the authority of husbands over wives, kings over empires, the Church over the human race. James Joyce was writing sentences without full stops and Picasso was painting pictures from four different perspectives all at the same time. Many of those who fought in 1940 did so not to protect or conserve the old values, but to build new ones. After the carnage of the Great War and the misery of the Depres- sion, the old 'God, King and Empire' talk would never have been enough to motivate the 1940 generation. Young people would not have volunteered in such numbers, or served so enthusiastically, were it not for the fact that this war, this cause, was both patriotic and progressive.

But even if some of the values of 1940 did anticipate the great wave of freedom No you can't go to bed you'll stay up late, its good for you.'

and permissiveness that was to follow, Edith Kup still has a point. That year, and that war, could not have been endured without a large helping of the older, tougher way, the 'do as you're bloody-well- told' way. Britain needed the bayonet and the battleship before it could embrace Beveridge and the Beatles.

Iain Nethercott is one of the bravest people I have ever met, a real hero of 1940; but 1 wouldn't swap his childhood for mine, or my son's. He went to one of the infamous Navy training ships, his life ruled by the 'crushers' and their canes, his days beginning with a terrifying trip up a 150-foot mast. There were no safety nets — a good enough description of the whole pre-Beveridge world in which he grew up. Boys would fall and die. Today there would be inquiries and Health and Safety, and that, it seems to me, is exactly as it should be. But the old way, the tough old Navy way, turned out the kind of sailors who went in under the Stukas and pulled people off the beaches of Dunkirk, or kept going month after month on the Atlantic convoys, the kind of men — men like lain Nethercott — who grinned and bore it, and kept on going through years of misery until the war was won.

Recently, in London's New Cross, I came across a group of bored-looking teenagers at the railway station casually abusing customers as they walked past. Some got spat on, some got attempted trip-ups, enough for a broken hip for the over-80s. No one dared challenge them not their victims, not the numerous Con- nex staff in their RAF-blue uniforms, not even me, I'm ashamed to say, despite my daily exposure to the courage of the 1940 generation. What would Iain or Martin or even Edith have done? Had a go, no ques- tion; and if a teenager had ended up with a broken nose, nobody would have thought badly of them for it.

But me? Well, what's the point, I thought? They might pull a knife, fetch their older brothers, get the police or the social workers. A few years ago I did inter- vene in a similar situation, grabbing an arm and taking a handful of elastic bands away from one of two kids who were flick- ing them into the faces of passers-by. I got spat on and threatened, and one said he was going to tell a policeman that I'd just offered him £20 for sex. He knew the pres- sure points to push to get his own way. He'd clearly been brought up to believe that he was immune to any discipline imposed by the adult world.

Maybe it's meeting so many of the heroes of 1940, maybe it's because I'm passing 40 myself, but I think about the comparisons between these two eras a lot now. Much about the world of 1940 was grey and drab and authoritarian. I'd miss the colour and vitality of modern Britain. I'd miss Monty Python too. But there's a kind of slovenly cruelty, an off-hand rude- ness about today that, I strongly suspect, was nothing like as common then.

I live in Strawberry Hill, near Twicken- ham, Eurocamp stickers on every Volvo. The local train station was painted recent- ly. A few days later there was graffiti. It was cleaned off. A few of us commuters stood around and smiled at each other. It felt like a small triumph for civilisation. Hard to explain, really, this desire for order and clean walls and neat gardens, this anger at shambling teenagers with mobile phones, spitting and dropping lit- ter. 'Help,' I say, 'I'm turning into Peter Hitchens.' But I'm not, I hope. No, I don't hate modern Britain or even these grotty, stroppy kids — I just want someone to sort them out, focus, motivate and organise them. And to tell the ones who torment old ladies to stop it, or else.

So what have I learnt as I've toured the country, talking to its greatest generation? I've learned that modern Britain needs a dose of the 1940 spirit. Not to browbeat its young, or to crush the individuality out of them, but to give them back values that have been taken away from them: a proper sense of community, a respect for where they live and the people who live alongside them. As I travel on our filthy local railways I daydream about some kind of national youth service, squads of 18-year-olds work- ing together doing up old people's houses or getting rid of the piles of festering rub- bish on the North London line, rich and poor together, no exceptions.

Fast forward 30 years and these once grotty kids will say that it was the best time of their lives, just as people do about the war — because it was shared, because it was about looking out for one another, because it satisfied a human need for something bigger than individual pleasure.

And if anyone in the No. 10 policy unit wants to go for the idea, I know an ex- WAAF and a former sergeant-major who'd love to help them organise it.