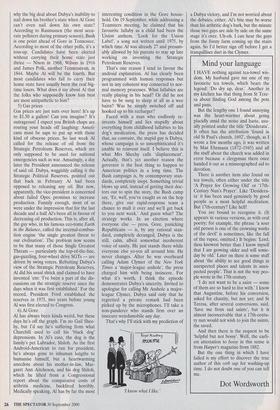 I HAVE nothing against tea-towel wis- dom. My husband gave me one of my favourite tea towels, which bears the legend: 'Do dry up, dear.' Another in my kitchen has that thing from St Tere- sa about finding God among the pots and pans.

But the lengthy one I found annoying was the heart-warmer about going placidly amid the noise and haste, usu- ally printed under the title 'Desiderata'. It often has the attribution 'found in old St Paul's church, 1692', though, as I wrote a few months ago, it was written by Max Ehrmann (1872-1945) and all the stuff about the church was added in error because a clergyman there once handed it out as a mimeographed aid to devotion.

There is another item also found on tea towels, often either under the title `A Prayer for Growing Old' or '17th- Century Nun's Prayer'. Like 'Desidera- ta' it has been used genuinely by good people as a most helpful meditation. But 17th-century? Like hell!

You are bound to recognise it. (It appears in various versions, as with oral poetry; for example, the phrase 'a sour old person is one of the crowning works of the devil' is sometimes, like the fall of the rupee, omitted.) It begins: 'Lord, thou knowest better than I know myself that I am growing older and will some- day be old.' Later on there is some stuff about 'the ability to see good things in unexpected places and talents in unex- pected people'. That is not the way peo- ple wrote in the 17th century.

`I do not want to be a saint — some of them are so hard to live with.' I know that Augustine, before his conversion, asked for chastity, but not yet; and St Teresa, after several conversions, said, `Save me from sad saints', but it is almost inconceivable that a 17th-centu- ry nun would not wish to join the saints, the saved.

And then there is the request to be `helpful but not bossy'. Well, the earli- est attestation to bossy in this sense is from Harper's magazine from 1882.

But the one thing in which I have failed is my effort to discover the true author of this verb sap for washing-up time. I do not doubt one of you can tell me.