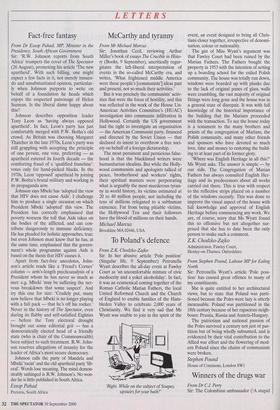 From Mr Michael Marcus Sir: Jonathan Cecil, reviewing Arthur Miller's book of essays The Crucible in Histo- ry (Books, 9 September), uncritically regur- gitates the left-liberal interpretation of events in the so-called McCarthy era, and writes, 'What frightened middle America were these people's [communists'] ideas past and present, not so much their activities.'

But it was precisely the communists' activ- ities that were the focus of hostility, and this was reflected in the work of the House Un- American Activities Committee's (HUAC) investigation into communist infiltration in Hollywood. Certainly the US government had the right to investigate an organisation — the American Communist party, financed and directed by the Soviet Union — that declared its intent to overthrow a free soci- ety on behalf of a foreign dictatorship.

The most persistent and pernicious false- hood is that the blacklisted writers were humanitarian idealists. But while the Holly- wood communists and apologists talked of peace, brotherhood and workers' rights, their spiritual masters were perpetrating what is arguably the most murderous tyran- ny in world history, its victims estimated at 20 to 40 million people, not including the tens of millions relegated to a subhuman existence. Far from being pitiable victims, the Hollywood Ten and their followers have the blood of millions on their hands.