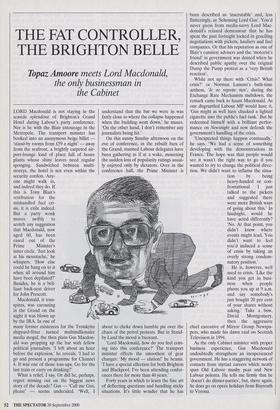 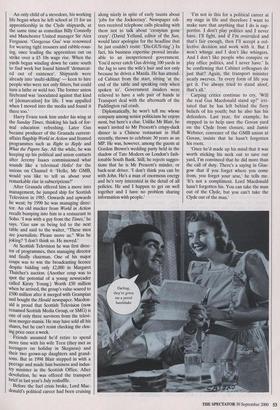 THE FAT CONTROLLER, THE BRIGHTON BELLE

the only businessman in the Cabinet

Prime Minister's inner circle. 'Just look at his moustache,' he whispers. 'How else could he hang on to it when all around him have been depilated?' Besides, he is a bril- liant back-seat driver for John Prescott.

Macdonald, it tran- spires, was carousing in the Grand on the night it was blown up by the IRA. In one of many former existences for the Trotskyite shipyard-fitter turned multimillionaire media mogul, the then plain Gus Macdon- ald was propping up the bar with fellow political journalists. 'I left about an hour before the explosion,' he reveals. 'I had to go and present a programme for Channel 4. It was one of those toss-ups. Go for the last train or carry on drinking?'

What a relief, I say. Or did he, perhaps, regret missing out on the biggest news story of the decade? Gus — 'Call me Gus, please' — seems undecided. 'Well, I understand that the bar we were in was fairly close to where the collapse happened when the building went down,' he muses. `On the other hand, I don't remember any journalists being hit.'

On this sunny Sunday afternoon on the eve of conference, in the rebuilt bars of the Grand, stunned Labour delegates have been gathering as if at a wake, mourning the sudden loss of popularity ratings usual- ly enjoyed only by dictators. Over in the conference hall, the Prime Minister is about to choke down humble pie over the chaos of the petrol protests. But in Stand- by Land the mood is buoyant.

`Lord Macdonald, how do you feel com- ing into this conference?' The transport minister effects the smoothest of gear changes: 'My mood — elation!' he beams. `I have a special affection for both Brighton and Blackpool. I've been attending confer- ences there for more than 40 years.'

Forty years in which to learn the fine art of deflecting questions and handling sticky situations. It's little wonder that he has been described as 'inscrutable' and, less flatteringly, as 'Scheming Lord Gus'. You'd never guess from media-savvy Lord Mac- donald's relaxed demeanour that he has spent the past fortnight locked in gruelling negotiations with pickets, hauliers and fuel companies. Or that his reputation as one of Blair's canniest advisers and the 'motorist's friend' in government was dented when he described public apathy over the original Dump the Pump protest as a 'very British reaction'.

While not up there with 'Crisis? What crisis?' or Norman Lamont's bath-time anthem, Ve ne regrette Hen', during the Exchange Rate Mechanism meltdown, the remark came back to haunt Macdonald. As one disgruntled Labour MP would have it, `Gus might as well have chucked a lighted cigarette into the public's fuel tank.' But he redeemed himself with a brilliant perfor- mance on Newsnight and now defends the government's handling of the crisis.

`Unexpected things happen continually,' he says. 'We had a sense of something developing with the demonstrations in France. The hope was that people would see it wasn't the right way to go if you wanted to try to change the political direc- tion. We didn't want to inflame the situa- tion by being heavy-handed or con- frontational. I just talked to the pickets and suggested there were more British ways of going about this.' In hindsight, would he have acted differently? `No. At that point, you didn't know where events might lead. You didn't want to feel you'd induced a sense of crisis by taking an overly strong condem- natory position.'

As the only Cabinet minister with proper business experience, Gus Macdonald undoubtedly strengthens an inexperienced government. He has a staggering network of contacts from myriad careers which neatly span Old Labour mushy peas and New Labour polenta. He tells me firmly that he `doesn't do dinner-parties', but, there again, he does go on opera holidays from Bayreuth to Verona. An only child of a stevedore, his working life began when he left school at 15 for an apprenticeship in the Clyde shipyards, at the same time as comedian Billy Connolly and Manchester United manager Sir Alex Ferguson. 'Gorgeous Gus' was renowned for wearing tight trousers and rabble-rous- ing, once leading the apprentices out on strike over a £5 10s wage rise. When the yards began winding down he came south to find work but found himself 'demarcat- ed out of existence'. Shipyards were already into 'multi-skilling' — keen to hire people who were not only fitters, but could turn a lathe or weld too. The former union firebrand was 'inoculated against that kind of [demarcation] for life. I was appalled when I moved into the media and found it there too.'

Harry Evans took him under his wing at the Sunday Times, thinking his lack of for- mal education refreshing. Later Gus became producer of the Granada current- affairs flagship World in Action and fronted programmes such as Right to Reply and What the Papers Say. All the while, he was keeping up his political and union contacts after Jeremy Isaacs commissioned what sounds like a televisual Hello! for the unions on Channel 4: 'Hello, Mr GMB, would you like to tell us about your remarkable rise in subscriptions?'

After Granada offered him a move into management, he jumped ship for Scottish Television in 1985. Onwards and upwards he went; by 1990 he was managing direc- tor. An old mucker from World in Action recalls bumping into him in a restaurant in Soho. 'I was with a guy from the Times,' he says. 'Gus saw us being led to the next table and said to the waiter, "These men are journalists. Please move us." Was he joking? 'I don't think so. He moved.'

At Scottish Television he was first direc- tor of programmes, then managing director and finally chairman. One of his major coups was to win the broadcasting licence despite bidding only £2,000 in Margaret Thatcher's auction. (Another coup was to spot the potential of a young newsreader called Kirsty Young.) Worth £50 million when he arrived, the group's value soared to £500 million after it merged with Grampian and bought the Herald newspaper. Macdon- ald is proud that Scottish Television (now renamed Scottish Media Group, or SMG) is one of only three survivors from the televi- sion merger-mania. He may have sold all his shares, but he can't resist checking the clos- ing price once a week.

Friends assumed he'd retire to spend more time with his wife Teen (they met as teenagers on holiday in Skegness) and their two grown-up daughters and grand- sons. But in 1998 Blair stepped in with a peerage and made him business and indus- try minister in the Scottish Office. After devolution, he was offered the transport brief in last year's July reshuffle.

Before the fuel crisis broke, Lord Mac- donald's political career had been cruising along nicely in spite of early taunts about `jobs for the Jockocracy'. Newspaper edi- tors received telephone calls pleading with them not to talk about 'cronyism gone crazy'. (David Yelland, editor of the Sun, would later apologise for the headline that he just couldn't resist: `Dis-GUS-ting'.) In. fact, his business expertise proved invalu- able to an inexperienced government. You'd never catch Gus driving 100 yards in the Jag to save the wife's hair and not only because he drives a Mazda. He has attend- ed Cabinet from the start, sitting 'at the end of the table and speaking only when spoken to'. Government insiders were relieved to have a safe pair of hands in Transport deal with the aftermath of the Paddington rail crash.

Diplomatically, he won't tell me whose company among senior politicians he enjoys most, but here's a clue. Unlike Mr Blair, he wasn't invited to Mr Prescott's crispy-duck dinner in a Chinese restaurant in Hull recently, thrown to celebrate 30 years as an MP. He was, however, among the guests at Gordon Brown's wedding party held in the shadow of Tate Modern on London's fash- ionable South Bank. Still, he rejects sugges tions that he is Mr Prescott's minder, or back-seat driver. 'I don't think you can be with John. He's a man of enormous energy and he's very interested in the detail of all policies. He and I happen to get on well together and I have no problem sharing information with people.' `I'm not in this for a political career at my stage in life and therefore I want to make sure that anything that I do is sup- portive. I don't play politics and I never have. I'll fight, and if I'm overruled and that's fair enough, then I'll accept a col- lective decision and work with it. But I won't whinge and I don't like whingers. And I don't like people who conspire or play office politics, and I never have.' Is he confirming that Cabinet colleagues do just that? Again, the transport minister neatly swerves. 'In every form of life you get it. I've always tried to stand aloof, that's all.'

Carping critics continue to cry, 'Will the real Gus Macdonald stand up?' irri- tated that he has left behind the fiery beliefs of his youth; but he also has his defenders. Last year, for example, he stepped in to help save the Govan yard on the Clyde from closure, and Jamie Webster, convener of the GMB union at Govan, insists that he hasn't forgotten his roots.

`Once he'd made up his mind that it was worth sticking his neck out to save our yard, I'm convinced that he did more than the call of duty. There's a saying in Glas- gow that if you forget where you come from, you forget your arse,' he tells me. `It's not a compliment. Lord Macdonald hasn't forgotten his. You can take the man out of the Clyde, but you can't take the Clyde out of the man.'