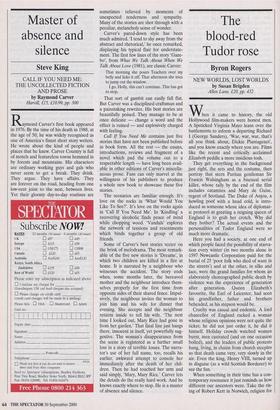 Master of absence and silence

CALL IF YOU NEED ME: THE UNCOLLECTED FICTION AND PROSE by Raymond Carver Harvig £15, £10.99, pp. 300 Raymond Carver's first book appeared in 1976. By the time of his death in 1988, at the age of 50, he was widely recognised as one of America's finest short story writers. He wrote about the kind of people and places that he knew. Carver Country is full of motels and featureless towns hemmed in by forests and mountains. His characters are ordinary working guys and gals who never seem to get a break. They drink. They argue. They have affairs. They are forever on the road, heading from one low-rent joint to the next, between lives. Yet their gloomy day-to-day routines are

sometimes relieved by moments of unexpected tenderness and sympathy. Many of the stories are shot through with a peculiar, melancholy sense of wonder.

Carver's pared-down style has been much admired. 'I tend to shy away from the abstract and rhetorical,' he once remarked, displaying his typical flair for understate- ment. The first few lines of the story 'Gaze- bo', from What We Talk About When We Talk About Love (1981), are classic Carver: That morning she pours Teachers over my

belly and licks it off. That afternoon she tries to jump out the window.

I go, Holly, this can't continue. This has got to stop.

That sort of gambit can easily fall flat. But Carver was a disciplined craftsman and a painstaking rewriter. His best stories are beautifully poised. They manage to be at once delicate — change a word and the effect is ruined — and explosively charged with feeling.

Call If You Need Me contains just five stories that have not been published before in book form. All the rest — the essays, introductions, reviews and fragment of a novel which pad the volume out to a respectable length — have long been avail- able in other editions of Carver's miscella- neous prose. Fans can only marvel at the willingness of his publishers to produce a whole new book to showcase these five stories.

Some of Carver's best stories teeter on the brink of melodrama. The most remark- able of the five new stories is 'Dreams', in which two children are killed in a fire at home. It is narrated by a neighbour who witnesses the accident. The story ends when, some months later, the bereaved mother and the neighbour introduce them- selves properly for the first time from opposite sides of their shared fence. Impul- sively, the neighbour invites the woman to join him and his wife for dinner that evening. She accepts and the neighbour returns inside to tell his wife. 'The next time I looked out, Mary Rice had gone in from her garden.' That final line just hangs there, innocent in itself, yet powerfully sug- gestive. The woman's disappearance from the scene is registered as a further small loss in a story of terrible losses. The narra- tor's use of her full name, too, recalls his earlier, awkward attempt to console her immediately after the death of her chil- dren. Then he had touched her arm and said simply, 'Mary, Mary Rice.' Carver lets the details do the really hard work. And he knows exactly where to stop. He is a master of absence and silence.