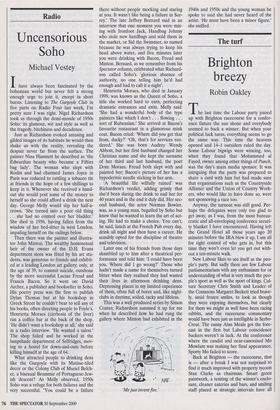 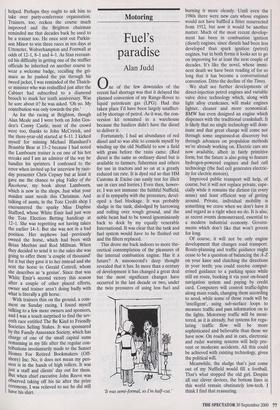 Anyway, the turnout was still good. Per- haps the delegates were only too glad to get away, as I was, from the most bureau- cratic and all-enveloping conference securi- ty blanket I have encountered. Having left the Grand Hotel all those years ago 20 minutes before the IRA blew it up, I am all for tight control of who gets in, but this time they won't even let you get out with- out a ten-minute walk.

New Labour likes to see itself as the peo- ple's party. But sadly there are few Labour parliamentarians with any enthusiasm for or understanding of what is very much the peo- ple's sport as well as the sport of kings. Cul- ture Secretary Chris Smith and Leader of the Commons Margaret Beckett tried brave- ly, amid frozen smiles, to look as though they were enjoying themselves, but clearly for them we might as well have been racing rabbits, and the racecourse commentary would have been just as intelligible in Serbo- Croat. The canny Alan Meale got the fore- cast in the first but Labour coincidence backers weren't in luck. At the conference where the candid and near-canonised Mo Mowlam was making her final appearance, Sporty Mo failed to score.

Back at Brighton — the racecourse, that is — after a break I was not surprised to find it much improved with property tycoon Stan Clarke as chairman. Smart green paintwork, a resiting of the winner's enclo- sure, cleaner eateries and bars, and smiling staff placed at strategic intervals have all helped. Perhaps they ought to ask him to take over party-conference organisation. Trainers, too, reckon the course much improved and the Brighton chairman reminded me that decades back he used to be a trainer too. He once sent out Parkin- son Minor to win three races in ten days at Uttoxeter, Wolverhampton and Fontwell at odds of 12-1,8-1 and 4-1. As Stan recount- ed his difficulty in getting one of the stuffier officials he inherited on another course to wear a welcome badge, recalling the gri- mace as he pushed the pin through his tweed jacket, I was reminded of the Thatch- er minister who was reshuffled just after the Cabinet had subscribed to a diamond brooch to mark her tenth anniversary. Was he sore about it? he was asked. 'Oh no. My contribution was only towards the pin.'

As for the racing at Brighton, though Alan Meale and I were both on John Gos- den's Conwy Castle, most of the crowd were too, thanks to John McCririck, and the three-year-old started at 8-11. I kicked myself for missing Michael Blanshard's Bramble Bear at 13-2 because I had noted the Lambourn trainer is on one of his hot streaks and I am an admirer of the way he handles his sprinters. I confessed to the error when invited up for interview by race- day presenter Chris Copsey but at least it gave me the chance to plug Valley of the Racehorse, my book about Lamboum, which is now in the shops. Just what your maiden aunt needs this Christmas. And talking of aunts, in the Tote Credit shop I encountered the sparky Miss Daphne Stafford, whose White Emir had just won the Tote Election Betting handicap at 12-1. She was regretting not having taken the earlier 14-1. But she was not in a bad position. Her nephews had previously owned the horse, which had been with Brian Meehan and Rod Millman. When they decided to send it to the sales she was going to offer them 'a couple of thousand' for it but they gave it to her instead and she sent the horse to Gerald Cottrell, whom she describes as 'a genius'. Since that was White Emir's second victory this season after a couple of other placed efforts, owner and trainer aren't doing badly with what is literally a gift horse.

With trainers thin on the ground, a com- ment on Sunday racing, I found myself talking to a few more owners and sponsors, and I was a touch surprised to find the sev- enth race entitled The Be Kind to Friendly Societies Selling Stakes. It was sponsored by the Family Assurance Society, which has charge of one of the small capital sums remaining in my life after the regular con- tributions involuntarily made to the Sunset Homes For Retired Bookmakers (Off- shore) Inc. No, it does not mean my pen- sion is in the hands of high rollers. It was JUSt a staff and clients' day out for them. But when chief executive John Reeve was observed taking off his tie after the prize ceremony, I was relieved to see he did still have his shirt.