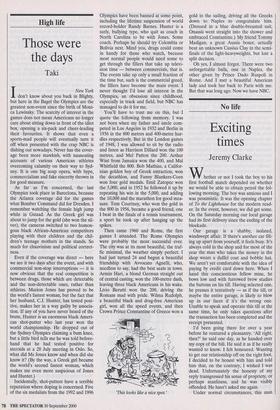 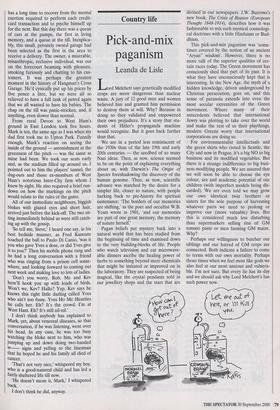 Whether or not I took the boy to his first football match depended on whether we would be able to obtain petrol the fol- lowing morning. The boy was anxious and I was pessimistic. It was the opening chapter of To the Lighthouse for the modern read- er. In the event, however, we did get some. On the Saturday morning our local garage had its first delivery since the ending of the blockade.

Our garage is a shabby, isolated, windswept affair. If there's another car fill- ing up apart from yourself, it feels busy. It's always cold in the shop and for most of the year the man who takes the money in the shop wears a duffel coat and bobble hat. We aren't yet comfortable with the idea of paying by credit card down here. When I hand this conscientious fellow mine, he bows low and with furrowed brow studies the buttons on his till. Having selected one, he presses it tentatively — as if the till, or maybe the entire garage, is likely to blow up in our faces if it's the wrong one. Unable to speak and operate this till at the same time, he only takes questions after the transaction has been completed and the receipt presented.

I'd been going there for over a year before he ventured a pleasantry. 'All right, then?' he said one day, as he handed over my copy of the bill. He said it as if he really wanted to know. I felt honoured. Wanting to get our relationship off on the right foot, I decided to be honest with him and told him that, on the contrary, I wished I was dead. Unfortunately the honesty of my reply transgressed his sense of propriety, or perhaps manliness, and he was visibly offended. He hasn't asked me again.

Under normal circumstances, this man has a long time to recover from the mental exertion required to perform each credit- card transaction and to psyche himself up for the next. But this day there was a queue of cars at the pumps, the first in living memory, and a queue at the till. Inexplica- bly, this small, privately owned garage had been selected as the first in the area to receive a delivery. The owner, a miserable, misanthropic, reclusive individual, was out on the forecourt beaming with pleasure, smoking furiously and chatting to his cus- tomers. It was perhaps the greatest moment in the history of Hangman's Cross Garage. He'd cynically put up his prices by five pence a litre, but we were all so relieved to have a full tank of petrol again that we all wanted to have his babies. The chap on the till was panic-stricken, and, if anything, even slower than normal.

From rural Devon to West Ham's ground in East London took five hours. Mark is ten, the same age as I was when my dad first took me to Upton Park. Funnily enough, Mark's reaction on seeing the inside of the ground — astonishment at the greenness of the pitch — was the same as mine had been. We took our seats early and, as the stadium filled up around us, I pointed out to him the players' tunnel, the dug-outs and those ex-members of West Ham's notorious Inter-City firm whom I knew by sight. He also required a brief run- down on how the markings on the pitch would relate to the rules of the game.

All of our immediate neighbours, biggish blokes with glazed eyes and short hair, arrived just before the kick-off. The two sit- ting immediately behind us were still catch- ing up with the gossip.

`So tell me, Steve,' I heard one say, in his best bedside manner, as Fred Kanoute touched the ball to Paulo Di Canio, 'was it you who gave Yves a dose, or did Yves give it to you?' Then his mobile phone rang and he had a long conversation with a friend who was ringing from a prison cell some- where, and looking forward to coming out next week and making love to lots of ladies. `Don't you worry, Rob. Me and Key here'll hook you up with loads of birds. Won't we, Key? Hallo? Yep. Key says he knows this right little darling called Yves who ain't too fussy. Yves Ho Me Hearties he calls her. Eh? It's the crowd. I'm at West Ham. Eh? It's still nil-nil.'

I don't think anybody has explained to Mark, yet, about venereal diseases, so that conversation, if he was listening, went over his head. In any case, he was too busy watching the bloke next to him, who was jumping up and down doing two-handed Iv— signs and yelling to the linesman that he hoped he and his family all died of cancer.

`That's not very nice,' whispered my boy, who is a good-natured child and has led a fairly sheltered life till now.

`He doesn't mean it, Mark,' I whispered back.

I don't think he did, anyway.