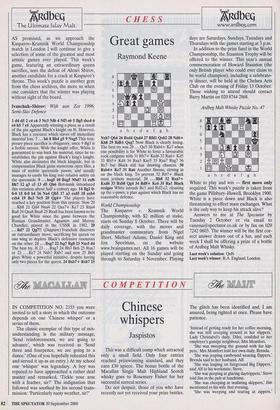 AS promised, as we approach the Kasparov–Kramnik World Championship match in London I will continue to give a selection of some of the greatest and most artistic games ever played. This week's game, featuring an extraordinary queen sacrifice, sees the defeat of Alexei Shirov, another candidate for a crack at Kasparov's throne. This week's puzzle is another gem from the chess archives, the more so when one considers that the winner was playing without sight of the board.

World Championship The Kasparov v. Kramnik World Championship, with $2 million at stake, starts on Sunday 8 October. There will be daily coverage, with the moves and grandmaster commentary from Nigel Short, Michael Adams, Daniel King and Jon Speelman, on the website www.braingames.net. All 16 games will be played starting on the Sunday and going through to Saturday 4 November. Playing days are Saturdays, Sundays, Tuesdays and Thursdays with the games starting at 3 p.m.

In addition to the prize fund in the World Championship, the Staunton Trophy will be offered to the winner. This year's annual commemoration of Howard Staunton (the only British player who could ever claim to be world champion), including a celebrato- ry dinner, will be held at the Chelsea Arts Club on the evening of Friday 13 October. Those wishing to attend should contact Barry Martin on 020 8744 2868.

Ardbeg Malt Whisky Puzzle No. 47 White to play and win — first move only required. This week's puzzle is taken from the game Pillsbury–Howell, Brooklyn 1900. White is a piece down and Black is also threatening to effect mass exchanges. What is the only way to keep his attack alive?

Answers to me at The Spectator by Tuesday 2 October or via email to vanessa@spectator.co.uk or by fax on 020 7242 0603. The winner will be the first cor- rect answer drawn out of a hat, and each week I shall be offering a prize of a bottle of Ardbeg Malt Whisky.