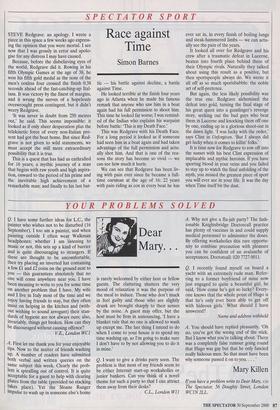 Q. I have some further ideas for L.C., the painter who wishes not to be disturbed (16 September). I too am a painter, and when painting outside I often wear Walkman headphones; whether I am listening to music or not, this sets up a kind of barrier and is quite discouraging to strangers. If these are thought to be uncomfortable, then try placing an inverted hat containing a few £1 and £2 coins on the ground next to you — this guarantees absolutely that no one will come anywhere near you. I have been meaning to write to you for some time on another problem that I have. My wife and I live in Italy most of the time and we enjoy having friends to stay, but they often insist on helping in the kitchen and (with- out wishing to sound arrogant) their stan- dards of hygiene are not always ours; also, invariably, things get broken. How can they be discouraged without causing offence?

YE., London WC1 A. First let me thank you for your enjoyable tips. Now to the matter of friends washing up. A number of readers have submitted both verbal and written queries on the same subject this week. Clearly the prob- lem is spiralling out of control. It is quite acceptable for a guest to help with clearing plates from the table (provided no stacking takes place). Yet the Sloane Ranger impulse to wash up in someone else's home is rarely welcomed by either host or fellow guests. The clattering shatters the very mood of relaxation it was the purpose of the meal to induce. Those who don't muck in feel guilty and those who are slightly drunk are brought sharply to their senses by the noise. A guest may offer, but the host must be firm in announcing, 'I have a blanket rule that no one is allowed to wash up except me. The last thing I intend to do when I come to your house is to spend my time washing up, so I'm going to make sure I don't have to by not allowing you to do it in mine.'

Q. I want to give a drinks party soon. The problem is that most of my friends seem to be either Internet start-up workaholics or junior bankers. Can you think of a novel theme for such a party so that I can attract them away from their desks?

CL., London W11 A. Why not give a flu-jab party? The fash- ionable Knightsbridge Doctorcall practice has plenty of vaccines in and could supply medical personnel to administer the doses. By offering workaholics this rare opportu- nity to combine precaution with pleasure you can be confident of an avalanche of acceptances. Doctorcall: 020 7727 0011.

Q. I recently found myself on board a yacht with an extremely rude man. Refer- ring to a former boyfriend of mine now just engaged to quite a beautiful girl, he said, 'How come he's got so lucky? Every- one knows that the whole point of Hugo is that he's only ever been able to get off with hideous girls.' What should I have answered?

Name and address withheld A. You should have replied pleasantly, 'Oh no, you've got the wrong end of the stick. But I know what you're talking about. There was a completely false rumour going round that Hugo was gay but that he only fancied really hideous men. So that must have been why someone passed it on to you. . . . '

If you have a problem write to Dear Mary, c/o The Spectator, 56 Doughty Street, London WC1N 2LL.