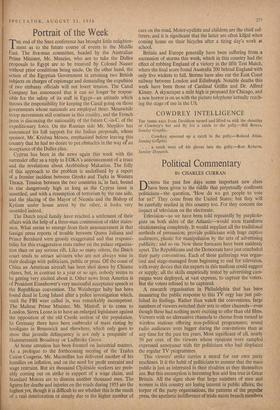 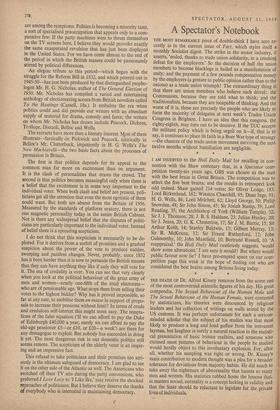 BY CHARLES CURRAN D URING the past few days some important

new clues have been given to the riddle that perpetually confronts politicians—the question, 'How do we get people to vote for us?' They come from the United States; but they will be carefully studied in this country too. For they concern the impact of television on the electorate.

Television—so we have been told repeatedly by psepholo- gists on both sides of the Atlantic—would soon transform electioneering completely. It would supplant all the traditional methods of persuasion; provide politicians with huge captive audiences, plastic for manipulation by the arts of advertising publicity; and so on. Now these forecasts have been suddenly upset. The Republicans and the Democrats have just concluded their party conventions. Each of these gatherings was organ- ised and stage-managed from beginning to end for television. with every device that the experts in this medium could suggest or supply; all the skills empirically tested by advertising cam- paigns were deployed, at vast expense, to capture the voters. But the voters refused to be captured.

A research organisation in Philadelphia that has been measuring the public response to this TV orgy has just pub- lished its findings. Rather than watch the conventions, large numbers of viewers switched their sets to other channels—even though these had nothing more exeiting to offer than old films. Viewers with no alternative channels to choose from turned to wireless stations offering non-political programmes; sound radio audiences were bigger during the conventions than at any time for the past ten years. Most significant of all, nearly 70 per cent. of the viewers whose opinions were sampled expressed annoyance with the politicians who had displaced the regular TV programmes.

This viewers' strike carries a moral for our own party machines. It it the habit of politicians to assume that the mass public is just as interested in their rivalries as they themselves are. But this assumption is becoming less and less true in Great Britain. All the signs show that large numbers of men and women in this country are losing interest in public affairs; the torpor of the party organisations, the patterns of the popular press, the apathetic indifference of trade union branch members are among the symptoms. Politics is becoming a minority taste, a sort of specialised preoccupation that appeals only to a com- parative few. If the party machines were to thrust themselves on the TV screens here, I believe they would provoke exactly the same exasperated revulsion that has just been displayed in the United States. For we have come almost to the end of the period in which the British masses could be passionately stirred by political differences.

An elegiac tribute to this period—which began with the struggle for the Reform Bill in 1832, and which petered out in 1945-50—has just been produced by that distinguished psepho- logist Mr. H. G. Nicholas, author of The General Election of 1950. Mr. Nicholas has compiled a varied and entertaining anthology of electioneering scenes from British novelists called To the Hustings (Cassell, 18s.). It embalms the era when politics could and did provide our writers with an abundant supply of material for drama, comedy and farce; the writers on whom Mr. Nicholas has drawn include Peacock, Dickens, Trollope, Disraeli, Belloc and Wells.

The extracts have more than a literary interest. Most of them illustrate—farcically .in Pickwick and Peacock, satirically in Belloc's Mr. Clutterbuck, impatiently in H. G. Wells's The New Machiavelli—the two basic facts about the processes of persuasion in Britain.

The first is that politics depends for its appeal to the common man far more on excitement than on argument. It is the clash of personalities that draws the crowd. The second is that politics becomes meaningful only when there is a belief that the excitement is in some way important to the individual voter. When both clash and belief are present, poli- ticians get all the attention that even the most egotistic of them could want. But both are absent from the Britain of 1956. Measured by the standards of platform oratory, there is not one magnetic personality today in the entire British Cabinet. Nor is there any widespread belief that the disputes of politi- cians are particularly important to the individual voter. Instead of belief there is a spreading scepticism.

I do not think that this scepticism is necessarily to be de- plored. For it derives from a surfeit of promises and a gradual suspicion about the power of the vote to produce sudden, sweeping and painless changes. Never, probably, since 1832 has it been harder than it is now to persuade the British masses that they can have anything they like if only they will vote for it. The era of credulity is over. You can see that very clearly when you look at the political behaviour of the great army of men and women—nearly one-fifth of the total electorate— who are of pensionable age. What stops them from selling their votes to the highest bidder? Why has it proved impossible, so far at any rate, to mobilise them en masse in support of propo- sals to increase their pensions without limit? In terms of crude and credulous self-interest this might seem easy. The tempta- tions of the false equation (If we can afford to pay the Duke of Edinburgh £40,000 a year, surely we can afford to pay the old-age pensioner £5—or £10, or £20—a week') are there for any demagogue to exploit. But nobody has succeeded in doing it yet. The most dangerous risk in our domestic politics still seems remote. The scepticism of the elderly voter is an inspir- ing and an impressive fact.

This refusal to take politicians and their promises too seri- ously is the ultimate safeguard of democracy. I am glad to see it on the other side of the Atlantic as well. The Americans who switched off their TV sets during the party conventions, who preferred 1 Love Lucy to 'I Like Ike,' may receive the shocked reproaches of politicians. But I believe they deserve the thanks Of everybody who is interested in maintaining democracy.