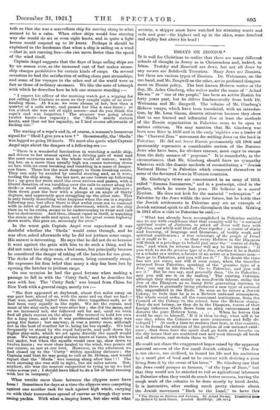 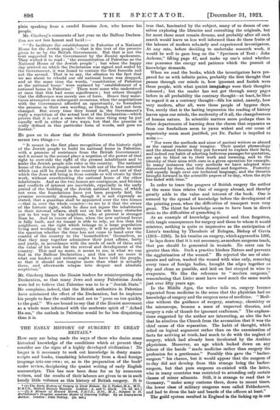 IT is well for Christians to realize that there are many different schools of thought in Jewry as in Christendom and, indeed, in Islam. Trotsky and Zinovieff are Jews, but not all Jews by any means are Bolshevik Terrorists. Many Jews are Zionists, but there are various types of Zionism. Dr. Weizmann, on the one hand, and Mr. Zangwill on the other, are in profound disagree- ment on- Zionist policy. The best known Hebrew writer of the day, Mr. Asher Ginsberg, who writes under the name of " Ached Ha-am " or " one of the people," has been an active Zionist for forty years past, but he differs fundamentally from both Dr. Weizmann and Mr. Zangwill. Tho volume of Mr. Ginsberg's Hebrew essays, which have been translated, with an introduc- tion, by Mr. Leon Simon, deserve attention because they show that to one learned and influential Jew at least the methods of the Zionist organization in Palestine seem to be open to serious criticism. We may mention that Mr. Ginsberg was born near Kiev in 1856 and in the early 'eighties was a leader of the " Chovev6 Zion" movement for settling Jews on the land: in Palestine. He did not leave Russia permanently till. 1908 and presumably represents a considerable section of the Russian Jews who have been, for obvious reasons, most eager to escape from the daily menace of " pogroms." It is remarkable, iu the

circumstances, that Mr. Ginsberg should have no sympathy whatever with the drastic methods of reconstituting a " Jewish National Home " in Palestine which commend themselves to some of the favoured Jews in Western, countries.

Mr. Ginsberg's views are concentrated in an essay of 1912; called " Summa Summarum," and in a postscript, cited in the preface, which ho wrote last year. He believes in a moral Zionism. He does not look for the material " redemption " of Palestine by the Jews within the near future, but he holds •that the Jewish settlements in Palestine may set an example of Jewish national spirit to all Jews throughout the world. Writing in 1912 after a visit to Palestine he said.:—

" What has already been accomplished in Palestine entitles one to say with confidence that that country will bo as national spiritual centre of Judaism, to which all Jews will turn with affection, and which will bind all. Jews together ; a centre of study and learning, of language and literature, of bodily work. and spiritual purification ; a true miniature of the people of Israel as it ought to be . . . so that every Hebrew in the Diaspora will think it a privilege to behold just once the " centre- of Juda- ism," and when he returns home will say to Ids friends : " If you wish to seethe genuine type of a Jew, whether it be a Rabbi or a scholar or a writer, a farmer or an artist or a business man— then go to Palestine, and you will see it." ' No doubt the time has not yet come, nor will it soon come, when the traveller returned from Palestine, speaking of the ' genuine typo of a Jew,' can say to his friends, `Go to Palestine, and you will see it.' But he can say, and generally does, ' Go to Palestine, and you will see- it in the making.' The existing Colonies, although they depend mainly on non-Jewish labour, strike the Jew of the Diaspora as so many little generating stations, in which there, is gradually- being produced a new typo of national life, unparalleled in the Exile. So soon as he enters a Jewish Colony, he feels that he is in a Hebrew national atmosphere. The whole social order, all the communal institutions, from the Council of the Colony to the school, bear tho Hebrew stamp. They do not betray, as they do in the Diaspora, traces of that foreign influence which flows from an alien environment and distorts the pure Hebrew form. . . . When he leaves this world he says to himself, If it is thus to-day, what will it be one day, when the Colonies are more numerous and • fully de.; veloped Y ' At such a time he realizes that here, in this country, is to be found. the solution of the problem of our national exist- ence ; that from hero the spirit shall go forth and breathe on the dry bones that are scattered east and west through all lands and all nations, and restore them to life."

He could not share the exaggerated hopes raised by the apparent

material success of the few small Jewish colonies. " The Jew is too clever, too civilized, to bound his life and his ambitions by a small plot of land and to be content with deriving a poor living from it by the sweat of his brow." Mr. Ginsberg saw that the Jews could prosper as farmers, " of the type of Boaz," but that they would not be satisfied to toil as agricultural labourers. in Palestinewhen they could do much better oversee, leaving the rough work of the colonies to be done mostly by hired Arabs. It is instructive, after reading much pretty rhetoric about the Jewish movement " Back to the Land," to have this Ten Essays on Zionism and Judaism. By Achad Ha-am. Ttaoalatwittoa the Hebrew by Leon Simon. London: Houttedge. Lea. net.'

plain speaking from a candid Russian Jew, who knows his people.

Mr. Ginsberg's comments of last year on the Balfour Declara- tion are not less honest and lucid :—

" ' To facilitate the establishment in Palestine of a National Home for the Jewish people '—that is the text of the promise given to us by the British Government. But that is not the text suggested to the Government by the Zionist spokesmen. They wished it to read : ' the reconstitution of Palestine as the National Home of the Jewish people ' ; but when the happy clay arrived on which the Declaration was signed and sealed by the Government, it was found to contain the first formula and not the second. That is to say, the allusion to the fact that we are about to rebuild our old national home was dropped, and at the same time the words, constitution of Palestine as the national home ' were replaced by establishment of a national home in Palestine.' There were some who understood at once that this had some significance ; but others thought that the difference was merely one of form. Hence they some- times attempted on subsequent occasions, when the negotiations with the Government afforded an opportunity, to formulate the promise in their own wording, as though it had not been changed. But every time they found in the Government's reply a repetition of the actual text of the Declaration—which proves that it is not a case where the same thing may be put equally well in either of two ways, but that the promise is really defined in this particular form of words, and goes no further."

He goes on to show that the British Government's promise meant two things :- " It meant in the first place recognition of the historic right of the Jewish people to build its national home in Palestine, with a promise of assistance from the British Government ; and it meant in the second place a negation of the power of that right to over-ride the right of the present inhabitants and to make the Jewish people sole ruler in the country. The national home of the Jewish people must be built out of the free material which can still be found in the country itself, and out of that which the Jews will bring in from outside or will create by their work, without overthrowing the national home of the other inhabitants. And as the two homes are contiguous, and friction and conflicts of interest are inevitable, especially in the early period of the building of the Jewish national home, of which not even the foundations have yet been properly laid, the promise necessarily demands, though it is not expressly so stated, that a guardian shall be appointed over the two homes —that is, over the whole country----to see to it that the owner of the historic right, while he does not injure the inhabitants in their internal affairs, shall not on his side have obstacles put in his way by his neighbour, who at present is stronger than he. And in course of time, when the new national home is fully built, and its tenant is able to rely, no less than his neighbour, on the right "which belongs to a large population living and working in the country, it will be possible to raise the question whether the time has not come to hand over the control of the country to the ' householders ' themselves, so that they may together administer their joint affairs, fairly and justly, in accordance with the needs of each of them and the value of his work for the revival and development of the country. This and no more, it seems to me, is what we can find in the Balfour Declaration ; and this and no more is what our leaders and writers ought to have told the people, so that it should not imagine more than what is actually there, and afterwards relapse into despair and absolute scepticism."

Mr. Ginsberg blames the Zionist leaders for misinterpreting the Declaration, so that many Jews and many Palestinian Arabs were led to believe that Palestine was to be a " Jewish State." He complains, indeed, that the British authorities in Palestine have minimized the effect of the Declaration, but he implores his people to face the realities and not to " press on too quickly to the goal." We are bound to say that if the Zionist movement as a whole were informed with the moderate spirit of " Ached Ha-am," the outlook in Palestine would bo far less disquieting than it is.