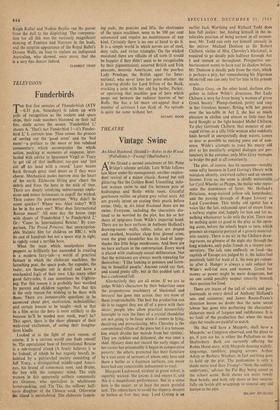 THE first few minutes of Thunderbirds (ATV —6.35 p.m. Saturdays) is taken up with yells of recognition as the rockets and space ships, their code numbers blazoned on their tail fins, sizzle across the screen. `Funderbird 1,' shouts A. 'That's not Funderbird 1—it's Funder- bird 2,' L corrects him. Then comes the process of sorting out the 'good mens' and the 'bad mens'—a preface to the more or less subdued commentary which accompanies the whole action, peaking at moments of suspense, inter- larded with advice to Spacemen Virgil or Tracy to get rid of that inefficient ray-gun and 'just cut off his head with a sword.' Laser beams hack through great steel doors as if they were cheese. Mechanical moles burrow into the heart of the earth. Elaborate lifting gear clears the debris and frees the hero in the nick of time. There are deeply satisfying subterranean explo- sions and minor holocausts to engulf the wicked. Then comes the post-mortem. 'Why didn't he come quicker? Where was Alan today? Will he be in the next one? What does International Rescue mean?' All next day the house rings with shouts of `Funderbird 1 to Funderbird 2.' Or : 'Come in, International Rescue.' By com- parison, The Proud Princess, that unexception- able Stalinist film for children on BBC-1, with its cast of hundreds but not a space ship in sight, is rightly voted a terrible bore.

What the team which manipulates these puppets so brilliantly has succeeded in creating is a modern fairy-tale—a world of practical fantasy in which the elaborate machines, the launching gear, the space pods, the capsules, the radar, are thought out in detail and have a mechanical logic of their own. Like many other good fairy-tales, it can sometimes be frighten- ing. For this reason it is probably best watched by parents and children together. Not that this is the only reason for wishing to be there with them. There are innumerable questions to be answered about plot, motivation, technicalities; and certain lessons to be taught—such as that in a film series the hero is most unlikely to die because he'll be needed next week, won't he? This apart, there is the sheer pleasure of their wide-eyed excitement, of seeing their imagina- tions kindle.

Looked at in the light of pure reason, of course, it is a curious world one finds oneself

in. The operational base of International Rescue is a sub-tropical island (A firmly believes it to be Ireland, of which he has vaguely heard), in- habited by a patriarchal society consisting of Jeff Tracy, a distinguished middle-aged Ameri- can, his brood of cosmonaut sons, and Brains, the boy with the computer mind. The only women in this apparently celibate community are Granma, who specialises in wholesome home-cnoking, and Tin Tin, the willowy half- caste daughter of the Chinese cook. Otherwise the island is uninhabited. The elaborate launch-

ing pads, the gantries and lifts, the electronics of the space machines, seem to be 100 per cent automated and require no maintenance of any kind. Certainly there is no one at hand to do it. It is a simple world in which nerves are of steel, duty calls, and virtue triumphs. On the wicked mainland there are villains of all sorts (I would be happier if they didn't seem to be recognisable by their pigmentation), assorted British and Irish peasants, neurotic Americans, and the peerless Lady Penelope, the British agent for Inter- national, who never loses her poise whether she is pouring drinks for Lord Stilton of the Bank, cracking a joint with her old lag butler, Parker, or operating that machine gun of hers which peeps out between the radiator louvres of her Rolls. She has a lot more sex-appeal than a number of actresses I can think of. No episode is quite the same without her.