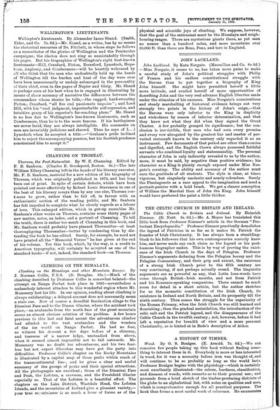 Thoreau, the Poet-Naturalist. By W. E. Channing. Edited by F. B. Sanborn. (Charles E. Goodspeed, Boston. 8s.)—The late William Ellery Channing left in the hands of his literary executor, Mr. F. B. Sanborn, material for a new edition of his biography of Thoreau, which was originally published in 1873, and has long been out of print. In spite of certain defects, which have been pointed out more effectively by Robert Louis Stevenson in one of the best of his literary essays than by any one else, Thoreau con- f_nues to grow, rather than to fall off, in favour with an enthusiastic section of the reading public, and Mr. Sanborn has felt impelled to complete what he clearly regards as a labour of love. This enlarged edition, which in get-up resembles Mr. Sanborn's other works on Thoreau, contains some thirty pages of new matter, notes, an index, and a portrait of Channing. To tell the truth, there is rather too much of Channing in this book, and Mr. Sanborn would probably have pleased Thoreauites—at least thoroughgoing Thoreauites—better by condensing than by dis- tending the book he has edited. Surely, for example, he need not have printed all the "Memorial Verses" he has given at the end of his volume. Yet this book, which, by the way, is a credit to American typography, will certainly be accepted as one of the standard books—if not, indeed, the standard book—on Thoreau.