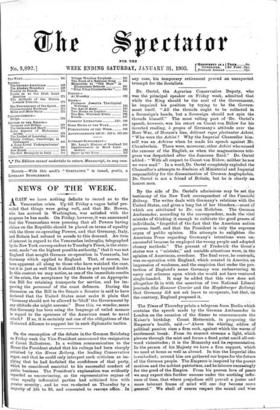 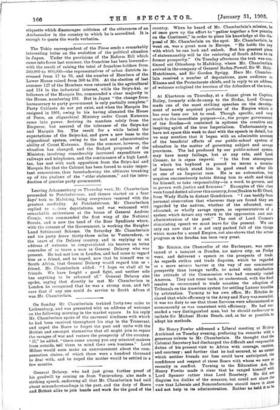 Page 17, 31 January 1903 — The Times of Thursday prints a telegram from Berlin which
Close

The Times of Thursday prints a telegram from Berlin which

contains the speech made by the German Ambassador in London on the occasion of the dinner to commemorate the Kaiser's birthday. Count Metternich, in proposing the Emperor's health, said :—" Above the whirling eddies 4 political passion rises a firm rock, against which the waves o,f excitement break. From its summit streams a light, which pierces through the mist and forms a fixed point amid all out- ward vicissitudes ; it is the Monarchy and its representative. In the person of his Majesty we have a firm support, which we need at home as well as abroad. In him the Imperial idea is embodied; around him are gathered our hopes for the future of the German people. The Emperor is inspired by the purest motives and. the noblest patriotism, and he labours unceasingly for the good of the Empire. From his proven love of peace we may expect, this further success under the soothing influ- ence of time, that where prejudices still prevail a juster and more tolerant frame of mind will one day become . more .gefieral." ,We shall of course respoct-the sound. and *lee

etiquette which discourages criticism of the utterances of an Ambassador in the country to which he is accredited. It is enough to quote the words verbatim.