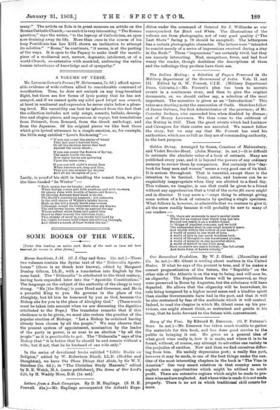 Our Benevolent Feudalism. By W. J. Ghent. (Macmillan and Co.

5s. net.)—Mr. Ghent is writing about matters in the United States. If what he says of the present is true, and if he makes a correct prognostication of the future, the "Republic" on the other side of the Atlantic is on the way to being, and will soon be, an oligarchy. The Republican forms will be preserved, as they were preserved in Rome by Augustus, but the substance will have departed. He allows that the oligarchy will be benevolent, its rule being tempered by a higher moral sense and a kindlier spirit than similar Governments have had in the past, and that it will be also restrained by fear of the multitude which it will. control Indeed, to read the chapter in which Mr. Ghent sums up his pre- visions, one might almost think, so restrained and gentle is his irony, that he looks forward to the future with contentment.