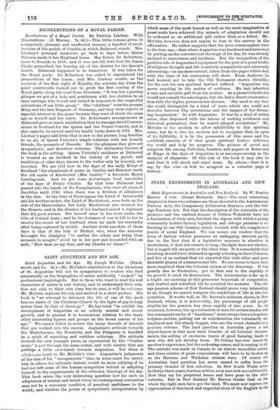 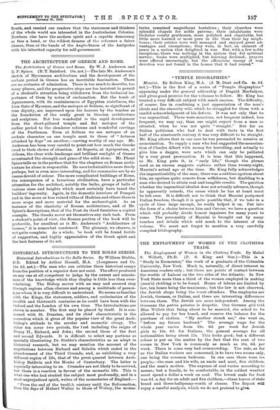 State Experiments in Australia and New Zealand. By W. Pember Reeves. 2 vols. (Grant Richards. 24e.)—The most interesting chapters in these two volumes are those devoted to the Australasian Factory Acts, the Compulsory Arbitration Statutes, and the Old- Age Pensions Act. Not that the description of the Australia of the pioneers and the realised dreams of Gibbon Wakefield have not a fascination of their own, but that the vigour with which a young community tackles factory legislation and old-age pensions is re- freshing to our Old Country minds worried with the complicated puzzle of social England. We can assure our readers that the story of factory reform possesses an unflagging interest, partly due to the fact that if a legislative measure is abortive in Australasia, it does not remain so long ; the fight does not slacken, but is waged till one party or the other wins. It is remarkable that sweating should have obtained so speedy a footing in these Colonies, and few of us realised that we exported this with other and more desirable phases of commerce and life. No one seems to have been more surprised than the Colonial citizen at the discovery. It was greatly due to Protection ; yet to that and to the rapidity of its growth it owed its destruction. The Australasian woke up in a fright one morning at this gruesome beanstalk of competition, and drafted and redrafted till he scotched the monster. The old- age pension scheme of New Zealand should prove very interesting to us, though we cannot compare the conditions of life in the two countries. It works well, as Mr. Reeves's criticism shows, in New Zealand, where, it is noteworthy, the percentage of old people eligible for the pension has risen rapidly of late years. In old countries, however, the specialisation of men for certain trades, and the consequent rarity of "handiness," must always leave a hopeless, helpless residue, putting out of consideration the voluntarily un- employed and the sturdy beggar, who are the worst obstacles to a pension scheme. The land question in Australia gives a sad object-lesson in that most fatal blunder of all Colonial Govern- ments, the selling of enormous tracts of good farming lands to men who did not develop them. No Colony has ever learnt by another's experience, but the reckoning comes, and is coming to all. The mistake was made in Canada to an almost incredible extent, and there estates of great corporations will have to be broken up as the Hatuma and Waikakai estates were. Of course the Australian land question has never ceased to suffer from the primary blunder of free selection. In New South Wales alone in thirty-three years fourteen million acres were iold unconditionally. Now they cry for perpetual leases and have gone to the other extreme. But in New Zealand Mr. Reeves thinks that on the whole the right men have got the land. We must now express our I appreciation of this lucid and impartial story of the English in the South, and remind our readers that the statesmen and thinkers of the whole world are interested in the Australasian Colonies. Nowhere else have the modern spirit and a capable democracy so free a hand, or the wildest dreams of the reformer a fairer chance, than at the hands of the Anglo-Saxon of the Antipodes with his inherited capacity for self-government.