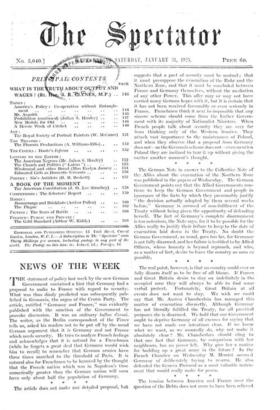 NEWS OF THE WEEK THE statement of policy last week

by the new German Government contained a hint that Germany had a proposal to make to France with regard to security. What was thus dimly predicted was subsequently pub- lished in Germania, the organ of the Centre Party. The article, entitled " Germany and France," was evidently published with the sanction of the Government to ' provoke discussion. It was an ordinary ballad d'essai. The writer, as the Berlin not of the Times tells us, asked his readers not to be put off by the usual German argument that it is Germany and not France which needs security. He tries to analyze French feelings and acknowledges that it is natural for a Frenchman (While he forgets a great deal that Germans would wish him to recall) to remember that German armies have three times marched to the threshold of Paris. It is natural also for Frenchmen to be haunted by the thought that the French nation which was in Napoleon's time numerically greater than the German nation will soon have only about half the population of GerMany. * * *