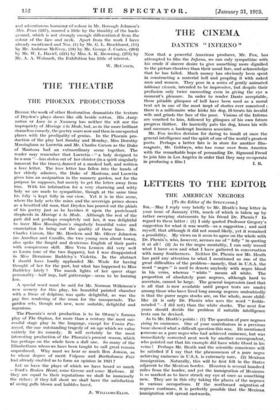 Now that a powerful American producer, Mr. Fox, has attempted to film the Inferno, we can only sympathize with his crude if sincere desire to give something more dignified to the picture-theatres than their usual fare, and acknowledge that he has failed. Much money has obviously been spent in constructing a material hell and peopling it with naked men and women. They pose in a series of gently animated tableaux vivants, intended to be impressive, but despite their profusion only twice succeeding even in giving the eye a moment's pleasure. In order to render Dante acceptable, these pitiable glimpses of hell have been used as a moral text set in one of the most inept of stories ever conceived : there is a millionaire who kicks his dog, ill-treats his invalid wife and grinds the face of the poor. Visions of the Inferno are vouched to him, followed by glimpses of his own future progress thither. He hurriedly pats the dog, kisses his wife and succours a bankrupt business associate.

Mr. Fox invites derision for daring to insult at once the general intelligence and the spirit of one of the world's greatest poets. Perhaps a better fate is in store for another film- magnate, Mr. Goldwyn, who has come over from America with the remarkable hope of persuading Dr. Sigmund Freud to join him in Los Angeles in order that they may co-operate