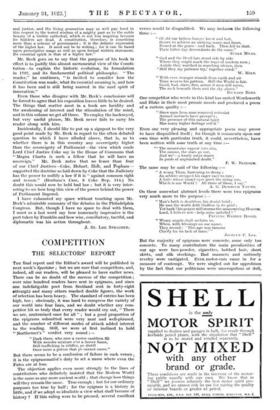 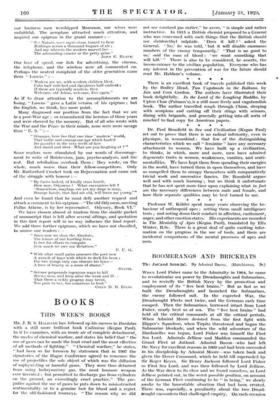 THE SELECTORS' REPORT THE final report and the Editor's award will be published in next week's Spectator ; but we are sure that competitors, and, indeed, all our readers, will be pleased to have earlier news. There can be no doubt of the success of the competition ; over nine hundred readers have sent in epigrams, and since one indefatigable poet from Scotland sent in forty-eight atte-x-la and many others reached double figures, the work of selection has been heavy. The standard of entries has been high, too ; obviously, it was hard to compress the variety of our world into four lines, and we doubt whether any com- petitor hit so truly that every reader would cry out, " There

we are, anatomized once for all " ; but a good proportion of the epigrams submitted were very neat and well-phrased, and the number of different modes of attack added interest to the reading. Still, we were at first inclined to hold " Northerner's " verdict very sound :—

But there seems to be a confession of failure in such verses it is the epigrammatist's duty to set a name where even the Fates are at loss.

The objection applies even more strongly to the lines of contributors who definitely insisted that the Modern World is the same as any more ancient world ; that change how things will they remain the same. True enough ; but for our ordinary purposes too true by half ; for the epigram is a history in little, and if we adopt so idealistic a view what shall become of history ? If this ruling were to be pressed, several excellent verses would be disqualified. We may instance the following three :-

" Of old our fathers hunger knew and lust,

Strove to achieve an undying name and fame, Peered at the grave—and back. Then fell to dust.

Their latter-day descendants do the same."

" God and the Devil late stood side by side Where they might mark the ways of modem men ; Awhile they watched in searching silence, then ' Still they my patience try,' together cried"

" With ever stranger strands from earth and air Time weaves his pattern. Still the World is fair. Good, bad, slave, free, across it men still move, The rock beneath them and the sky above."

One competitor who wrote in this kind has united Wordsworth and Blake in their most prosaic moods and produced a poem of a curious quality :-

" Since man from man removed restraint Animal instincts have prevaii'd ; The presence of this natural taint Has many higher feelings veil'd."

Even one very pleasing and appropriate poem may prove to have disqualified itself ; for though it comments upon our own time with particular truth, it could, nevertheless, have been written with some truth at any time :— "' The mountains vapour into airs,

The moons, the stars go out, And we'—a lonely satyr stares In pools of unplumbed doubt."

The same may be said of the following :— " A weary Titan, hastening to decay ;

An athlete stripped his eager race to run ; A babe whose round eyes greet the rising sun, Which is our World ? All three of them, I say."

On these somewhat abstract levels there were two epigrams very much more to the purpose :-

He sees the world drift Godless in its grief ; Yet hark ! his prayer still storms the unanswering Heaven; Lord, I believe not—help mine unbelief ! "

" Weary angels shall acclaim us, When, with blessings on our name, They record : ' This age was famous Chiefly for its lack of fame.' "

But the majority of epigrams were concrete, some only too concrete. To many contributors the main peculiarities of our age were face-powder, cigarettes, bobbed hair, short skirts, and silk stockings. Bad manners and untimely revelry were castigated. Even motor-cars came in for a measure of contempt. We were singled out for opprobium by the fact that our politicians were unscrupulous or dull,

our business men worshipped Mammon, our wives were unfaithful. The aeroplane attracted much attention, and inspired one epigram in the grand manner :-

" S13 Nature, once mysterious, tamed to bear Nothings across a thousand leagues of air ; And say wherein the modern marvel lies— The astounding courier or the petty prize." JOHN E. MEALY.

Our love of speed, our itch for advertising, the cinema, the telephone, and the wireless were all commented on. Perhaps the neatest complaint of the older generation came from " Luscus " :—

" Modem are we, with modern children blest, Cubs half unlicked and daughters half undrest : If these are typically model n, then

As if to draw attention to the accomplishments we are losing, " Luscus " gave a Latin version of his epigram ; but

the English, we think, has more point.

Many diagnosed our position from the fact that we arc in a post-War age ; or remembered the heroism of those years and were cheered by the memory. But of all who wrote with the War and the Peace in their minds, none were more savage than " E. S. " :—

That noble and courageous age which hurled Its gauntlet in the very teeth of fats And dared and died—What are you laughing at. ? "

Some readers were stimulated by our words of discourage- ment to write of Bolshevism, jazz, psycho-analysis, and the rest. But retribution overtook them : they wrote, on the whole, much worse than their fellow-competitors. Only Mr. Rutherford Croeket took on Rejuvenation and came out of the struggle with honour :— " By furies lashed, of kindly stars bereft, How now, Odysseus ? What encounters left ? Somewhere, mayhap, -ere yet my dirge is sung,

Strange hands, that find me old, will leave me young.' "

And even he found that he must defy another request and attach a comment to his epigram—" The old Odysseus, meeting Pallas Athene, is by her rejuvenated. Odyssey, Book VI."

We have chosen almost at random from the sizable packet of manuscript that is left after several siftings, and quotation in this first report will in no way influence the final report. We add three further epigrams, which we have not classified, to amuse our readers :— -

" Since now we shun the Absolute, The leisure of our hustling lives Is free for efforts to compute How much we owe our Relatives." P. U. G.

" With what small pains procures the poet now A wreath of bays with which to deck his brow ;

For two things only can obscure his fame— A love of beauty or a sense of shame."

Strong men, and keep alive the weak and ill—

That these a sickly progeny may breed, Too poor to tax, too numerous to feed." SrLVIS.