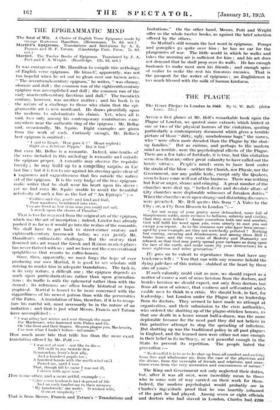 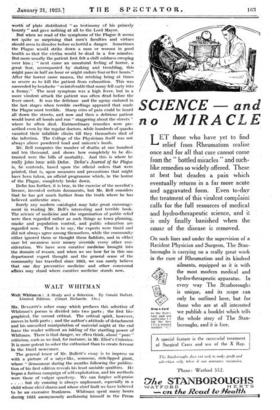 The Great Plague in- London in -1665. By G. W.-Bell: (John Arriso a first glance at Mr. Bell'g remarkable book u4oli the Plague of London, we quoted Some extracts Which hinted at

one or two of the physieall horrors of -the ,visitation, quoting

particularly a contemporary document which gives. a terrible .

picture of those '7dirty, rinwholesOnie hag's." the nurses, - - - who " were often more dreided Than the Plague by the shut- up families." But as curious, and *perhaps to the 'modern mind as terrible, were the psychological effects of the Plague. 'There arc a few; tales of fortitude, it is true, but this visitation '

*seem 3 less than any Other great 'calamity to have called out the heroic -virtue-4. People's Minds seem to have bent under th'e strain of the blosi—neither the Chur-ch,;ior Physic, nor the . _ (7.6s-eminent, nor any public body, except only_ the Quakers, seem to have come well out of the business. There was nothing but fear or anger; shame and cringing.. A. great number of the churches were shut up, " locked doors and 'desolate altars* of City churches were - deplorable 'witnesses of forsaken duties." When the churches were open strange" and disturbing discourses were preathei. - Mr. Bell quotes -this-from " A Voice to the City ; or, a Cry from Heaven to London ":—

- " Are riot many of your gentry more debauched, - Mere- full of -blasphemons. oaths, moro enemies to holiness, sobriety and civility,

-t ban-they were before I- Assure-yoUrSelyea- both orie and another;

God will fulfil his .word upon you, even utterly to root you out except you repent. As to the common sort who have been.encour- Aged by your example, are they not4-retehedly polluted ?. Nothing

but cursing, swearing and drimkenners,' and among -them-Hell i-i -broke- loose: and the very veins of . Modesty and Humanity are

relaxed, so that God may juetly•spreed your earkases as dung upon the face of the earth, and make room (by your destruction) for a

He goes on to exhort to repentance .those that have any

tenderness left You,that _can iiith•any remorse behOld the dying pale:face of this nationstahbed at the heart by these sins of Yours." - • -*--

If such _calamity- could visit us now we should'eXpect as a matter of course a sort of mass heroism from the doctors, and

besides heroism we should expect, not only from doctors. but

from all men of science, that coolness. and selfscontrol which enable men to-think in a crisis. Weshould look; in fact, for leadership ; but London under the Plague got no leadership

friars its doctors. They seemed to have made no attempt at organization, and their submission to the civic authorities, who ordered the shutting up of the plague-stricken houses, so that one death in a house meant half-a-dozen, was the more

deplorable because for the most part they did not belici,e in this primitive attempt to stop the spreading of -infection.

But shutting up was the traditional policy in all past plagues in England, and the learned men were either not sure enough in their belief in its inefficaey, or not powerful enough in the State to prevent its repetition. The people, hated the • precaution :— " So dreadful it is to us to be shut- up from all comfort and society', from free and wholesome air, from the care of the physician and

the divine, from the oversight of friends and relations, and. some- times even from the very necessities and conveniences of nature."

The King and Government not only neglected their duties, but, after it was all oa;cr, were incredibly mean to those who in *sonic* sort of way carried on their- work for them.

Indeed, the • mciderri psychologist would _probably. sec- in ('harles's ingratitude proof that he Was heartily ashamed of the part he had played. Among seven. or -eight officials and • dOetora who had staved in .London, Charles had £200 Worth of plate distribirted " as testimony of his princely bounty " and gave nOthing at all to the Lord Mayor. •

* But when we read of The symptoms of the Plague it -seems not quite so- surprising that men's faculties and virtues should seem to dissolve before so horrid a- danger. Sometimes the -Plague would strike down a man or woman in good health so-that the victim would be dead in a few minutes. But-more usually the patient first felt a chill -coldness creeping over him ;-- " next came an' unnatural- feeling of • horror, a great - Tear, accompanied. -by shaking and trembling, this might Vass-in half -an-hour or might .endtire four or five hours." After the horror came -nausea, the retching being at times so severe as to kill the patient from exhaustion. This was succeeded by headache so intolerable that many fell early into a frenzy."- • The next -symptom- was a high fever, but in a more virulent attack the patient was often dead before the fever .onset. It was the delirium- and the agony endured in the last stages when terrible swellings appeared that made the Plague most terrible. Sharp cries of pain could be heard all 'down the streets, and now and then a delirious patient would burst all bonds and run " staggering about the streets " where he often died.- Extraordinary rcmedies- were pre- scribed even by -the regular doctors, while hundreds of quacks vaunted their infallible elixirs till they. themselves died of the infection. .The College of the Physicians itself was not always 'above powdered. toad and unicorn's hoofs.

Mr. Bell computes the number of deaths at one hundred and ten thousand, and shows • how completely to be dis- trusted were the bills of mortality. And this is where he really joins issue with Defoe. Defoe's Journal of the Plague is, he contends, based upon the official, orders that were printed,- that is, upon measures and precautions that might have been taken, an official programme which, in the horror of the Plagne, completely broke down.

Defoe has further, it is true, in the exercise of the novelist's licence, invented certain documents, but Mr. Bell considers that he has got much further from the truth where he has believed authentic ones.

Surely any modern Fociologist may take great encourage-. ment' .reading .Mr. Bell's interesting and terrible book. The :science of Medicine and the 'organization of public relief were then -regarded rather as such things as town planning, smoke and population 'control, and - public &hi-cation arc regarded now. That is to say, the experts were timid and did not always agree among themselves, while the community either. ignored theni or thought them faddists, and in either. ease. let -Meatiness. over ni-oriey OVerride every Other con- sideration. We have seen curative medicine brought into the domain-of reason, and when we see how far in this one. department expert thought and the general -sense of. the community has travelled since 1665, we can surely believe that one day preventive medicine and other- communal