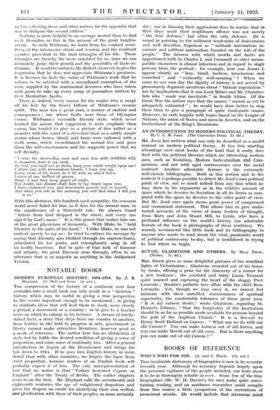 AN . INTRODUCTION TO MODERN POLITICAL THEORY. By C. E. M.

Joad. (The Clarendon Press. 2s 6d.) MR. JOAD has written what can only be described as-a model manual on modern political theory. It has this startling advantage over most books of the kind that it really does deal with the political theories which are interesting modern men, such as Socialism, Modern Individualism and COm- inunism, and not with aged controversies over the social Contract. Another admirable feature is the extremely well-chosen bibliography. Both in this section and in the context it is perhaps possible to detect Mr. Joad's own political point of view, not so much indeed from any bias which he fray show in his arguments as in the relative amount of Space Which he devotes to Socialism in all its forms as com- pared -with the space he devotes to the older point of view. But Mr. Joad once again shows great power of compressed and economical statement. This allows him to give undis- torted accounts of the views of many leaders of thought, from Marx and John Stuart Mill, to Lenin, who have a profound influence on the world's history (an admirable feature of the book is photographs of these worthies). We warmly recommend this little book and its bibliography to anyone who wants to read about the vital, passionate world of political controversy to-day, but is bewildered in trying to find where to begin.