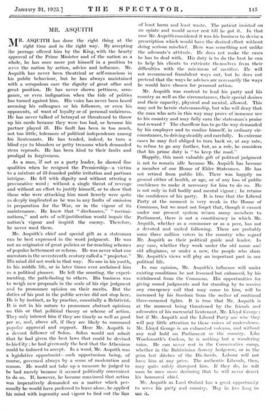 m-I-R. ASQUITH has done the right thing at the right time and in the right way. By accepting the peerage offered him by the King, with the hearty approval of the Prime Minister and of the nation as a whole, he has once more put himself in a position to verve the nation by action, advice and influence. Mr.

Asquith has never been theatrical or self-conscious in his public behaviour, but he has always maintained with a scrupulous care the dignity of great office and great position. He has never shown pettiness, arro- gance, or even indignation when the tide of politics has turned against him. His voice has never been heard accusing his colleagues or his followers, or even his opponents, of want of loyalty or of personal unfairness. He has never talked of betrayal or threatened to throw up his cards because they were too bad, or because his partner played ill. His fault has been in too much, not too little, tolerance of political independence among his lieutenants. He has tended, indeed, to turn a blind eye to blunders or petty treasons which demanded stern reproofs. He has been kind to their faults and prodigal in forgiveness.

As a man, if not as a party leader, he showed fine qualities when he resigned the Premiership—a victim to a mixture of ill-founded public irritation and partisan intrigue. He fell with dignity and without uttering a provocative word ; without a single threat of revenge and without an effort to justify himself, or to show that those who were attacking him most fiercely were quite as deeply implicated as he was in any faults of omission in preparation for the War, or in the vigour of its maintenance. He knew that " disclosures," " recrimi- nations," and acts of self-justification would impair the nation's vigour and inspirit the enemy. Therefore, he never used them.

Mr. Asquith's chief and special gift as a statesman can be best expressed in the word judgment. He was not an originator of great policies or far-reaching schemes of popular betterment or reform. He was never what our ancestors in the seventeenth century called a " projector." His mind did not work in that way. No one in his youth, in his middle life, or in later times ever acclaimed him as a political pioneer. He left the scouting, the experi- menting, the path-finding to others. His business was to weigh new proposals in the scale of his ripe judgment and to pronounce opinion on their merits. But the duties of his post in the public service did not stop here. He is by instinct, as by practice, essentially a Relativist. It is not in his nature to pronounce abstract opinions on this or that political theory or scheme of action. They only interest him if they are timely as well as good per se, and, above all, if they are likely to command popular approval and support. Here Mr. Asquith is a devout follower of Solon. Solon would not admit that he had given the best laws that could be devised to his City ; he had given only the best that the Athenians could be induced to accept. In a word, Mr. Asquith was a legislative opportunist—such opportunism being, of course, governed always by a sense of moderation and reason. He would not take up a measure he judged to be bad merely because it seemed politically convenient to do so. If, however, he became convinced that action was imperatively demanded on a matter which per- sonally he would have preferred to leave alone, he applied his mind with ingenuity and vigour to find out the line of least harm and least waste. The patient insisted on an opiate and would never rest till he got it. In that case Mr. Asquith considered it was his business to devise a prescription which would have the desired effect without doing serious mischief. Here was something not unlike the advocate's attitude. He does not make the cases he has to deal with. His duty is to do the best he can to help his clients to extricate themselves from their difficulties with the minimum of sacrifice. He will not recommend fraudulent ways out, but he does not pretend that the ways he advises are necessarily the ways he would have chosen for personal action.

Mr. Asquith was content to lead his party and his country as well as the circumstances, their special desires and their capacity, physical and mental, allowed. This may not be heroic statesmanship, but who will deny that the man who acts in this way may prove of immense MC to his country and may fully earn the statesman's praise and reward ? The chauffeur has to go the way demanded by his employer and to confine himself, in ordinary cir- cumstances, to driving steadily and carefully. In extreme cases he may feel obliged to turn back or, at any rate, to refuse to go any further, but, as a rule, he considers that his prime duty is " to keep the road."

Happily, this most valuable gift of political judgment is not to remain idle because Mr. Asquith has become a member of our House of Elder Statesmen. He has not retired from public life. There was happily no ground either of health, or age, or of any loss of public confidence to make it necessary for him to do so. He is not only in full bodily and mental vigour ; he retains the confidence of his party. It is true that the Liberal Party at the moment is very weak in the House of Commons, but we must not forget that, though it cannot under our present system return many members to Parliament, there is not a constituency in which Mr. Asquith, whether as a commoner or as a peer, has not a devoted and united following. There are probably some three million voters in the country who regard Mr. Asquith as their political guide and leader. In any case, whether they work under the old name and old allegiance, or under a new, the people who share Mr. Asquith's views will play an important part in our political life.

In our opinion, Mr. Asquith's influence will under existing conditions be not lessened but enhanced, by his withdrawal from the Commons. His opportunities for giving sound judgments and for standing by to receive any emergency call that may come to him, will be increased by his freedom from the welter of continual three-cornered fights. It is true that Mr. Asquith is at the moment being threatened by the friends and advocates of his mercurial lieutenant, Mr. Lloyd George ; but if Mr. Asquith and the Liberal Party are wise they will pay little attention to these voices of malevolence. Mr. Lloyd George is an exhausted volcano, and without any real hold on Parliament or the country. Like Wordsworth's Cuckoo, he is nothing but a wandering voice. He can never rest in the Conservative camp, whether in the Baldwinian flowery hedgerow, or in the grim last ditches of the Die-bards. Labour will not have him at any price. The authentic Liberals, then, may quite safely disregard him. If they do, he will soon be once more declaring that he will never desert his honoured chief.

Mr. Asquith as Lord Oxford has a great opportunity to serve his party and country. May he live long to