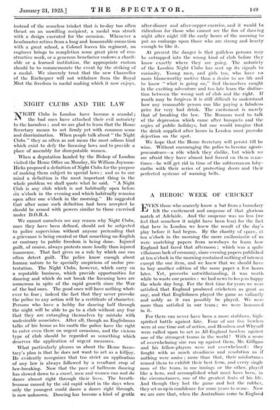 NIGHT CLUBS AND THE LAW

NIGHT Clubs in London have become a scandal ; the bad ones have attached their evil notoriety to the harmless ; and we are glad to learn that the Home Secretary means to act firmly yet with common sense and discrimination. When people talk about " the Night Clubs " they as often as not mean the most odious kind which exist to defy the licensing laws and to provide a place of assembly for disreputable women.

When a deputation headed by the Bishop of London visited the Home Office on Monday, Sir William Joynson- Hicks proposed a definition of Night Clubs for the purpose of making them subject to special laws ; and as to our Mind a definition is the most important thing in the whole problem we shall quote what he said. " A Night Club is any club which is not habitually open before six o'clock in the evening and which habitually remains open after one o'clock in the morning." He suggested that after some such definition had been accepted he should be armed with powers similar to those exercised under D.O.R.A.

We cannot ourselves see any reason why Night Clubs, once they have been defined, should not be subjected to police supervision without anyone pretending that a grievance is being created or that something un-English or contrary to public freedom is being done. Injured guilt, of course, always protests more loudly than injured innocence. That fact gives us a rule by which one can often detect guilt. The police know enough about human nature to be specially suspicious of undue pro- testation. The Night Clubs, however, which carry on a reputable business, which provide opportunities for dancing and which do not break the licensing laws are numerous in spite of the rapid growth since the War of the bad ones. The good ones will have nothing what- ever to fear ; indeed the fact that they never provoke the police to any action will be a certificate of character. Persons who have a hobby for dancing half through the night will be able to go to a club without any fear that they are entangling themselves by mistake with undesirable associates. After all, though an Englishman talks of his house as his castle the police have the right to enter even there on urgent occasions, and the vicious type of club should be regarded as something which deserves the application of urgent measures.

What particularly pleases us about the Home Secre- tary's plan is that he does not want to act as a killjoy. He evidently recognizes that too strict an application of any law is always followed by a resultant crop of law-brealcing. Now that the pace of ballroom dancing has slowed down to a crawl, men and women can and do dance almost right through their lives. The breath- lessness caused by the old rapid whirl in the days when only the youngest could dance a dance right through, is now unknown. Dancing has become a kind of gentle after-dinner and after-supper exercise, and it would La ridiculous for those who cannot see the fun of dancing night after night till the early hours of the morning to put an embargo upon thosc who are strong and hearty enough to like it.

At present the danger is that guileless persons may be entrapped into the wrong kind of. club before they know exactly where they are going. The notoriety of the London Night Clubs has sent up its signals to curiosity. Young men, and girls too, who have no more blameworthy motive than a desire to see life and to know " what is going on," find themselves caught in the exciting adventure and too late. learn the distinc- tion between the wrong sort of club and the right. If youth may be forgiven it is still difficult to understand how any reasonable person can like paying a fabulous price for very bad drink. The excitement is merely that of breaking the law. The Romans used to talk of the depression which came after banquets and the orgies of public holidays, but one would imagine that the drink supplied after hours in London must provoke dejection on the spot.

We hope that the Home Secretary will persist till he wins. Without encouraging the police to become agents- provocateurs—a role which they dislike, but which we are afraid they have almost had forced on them some- times—he will get rid in time of the subterranean laby- rinths with their series of protecting doors and their perfected systems of warning bells.