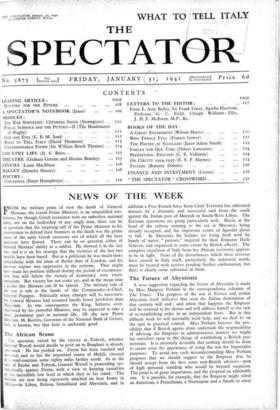 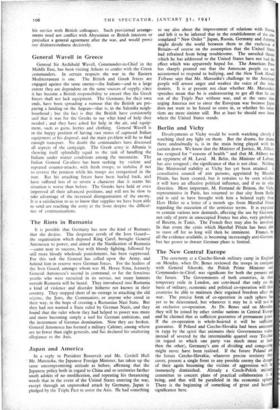 The Future of Abyssinia

A wise suggestion regarding the future of Abyssinia is made by Miss Margery Perham in the correspondence columns of The Times. The progress of the war in Eritrea and within Abyssinia itself indicates that soon the Italian domination of that country will end ; and when that happens the Emperor will be restored to his throne and will address himelf to the task of re-establishing order in an independent State. But in this difficult work he will inevitably need help, and we shall be on the spot in practical control. Miss Perham foresees the pos- sibility that if British agents alone undertook the responsibility of advising the Emperor in administrative matters we might lay ourselves open to the charge of establishing a British pro- tectorate. It is obviously desirable that nothing should be done to create even the appearance of using the war for Imperialist purposes. To avoid any such misunderstanding Miss. Perham proposes that we should suggest to the Emperor that he should accept from the first some non-British advisers—men of high personal standing who would be beyond suspicion. The point is of great importance, and the proposal an admirable one. It is possible, for example, that the Emperor might select an American, a Frenchman, a Norwegian and a Swede to enter his service with British colleagues. Such provisional arrange- ments need not conflict with Abyssinian or British interests or prejudice a general agreement after the war, and would prove our disinterestedness decisively.