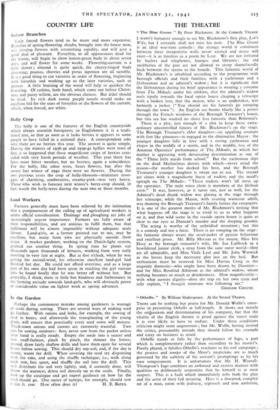 Page 11, 31 January 1941 — Land Workers Farmers generally must have been relieved by the
Close

Land Workers Farmers generally must have been relieved by the

intimation that a postponement of the calling up of agricultural workers is under official consideration. Drainage and ploughing are jobs of increasingly urgent importance. Farmers are fully aware of their responsibilities, and are anxious to fulfil them, but that fulfilment will be almost impossible without adequate male labour. Land-girls, as a farmer pointed out to me, may be excellent, but many farm jobs are physically outside their scope. A market gardener, working on the Dutch-light system, pointed out another thing. In spring time he plants out thousands upon thousands of lettuces, working from very early morning to very late at night. But at five o'clock, when he was getting his second-wind, his otherwise excellent land-girl had finished her day. He could not afford overtime, and as a large part of his own day had been spent in teaching the girl various jobs he found finally that he was better off without her. But generally, I think, there is little but kindness and forbearance in the farming attitude towards land-girls, who will obviously prove of considerable value on lighter work as spring advances.