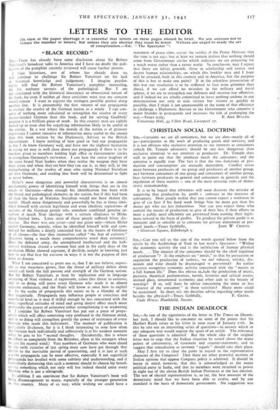 LETTERS TO THE EDITOR [In view ot the paper shortage

it is essential that letters on these pages should be brief. We are anxious not to reduce the number of letters, but unless they are shorter they must be fewer. Writers are urged to study the art of compression.—Ed.. "The Spectator "I BLACK RECORD"

Stx,—There has already been some discUssion about Sir Robert Vansittart's broadcast talks to America and I have no doubt the pub- lication of the pamphlet recently reviewed will cause further protest.

I hope historians, one of whom has already done so, will continue to challenge Sir Robert Vansittart on his lack of historical knowledge and judgement. I imagine psycho- logists will find Sir Robert Vansittart's pamphlet interesting, for his outburst savours of the pathological. But I am not concerned with the historical inaccuracy or obsessional nature of his book, for even if neither of these criticisms were true my concern would remain I want to register the strongest possible protest along another line. It is presumably the first ::oncern of our propaganda to weaken the resolve of the German nation as a whole I can con- ceive of nothing more calculated to strengthen the resolve of every decent-minded German than this book, and for serving Goebbels'. purpose it is a brilliant piece of work. In this country men are rightly locked up or even shot for supplying information likely to be useful to the enemy. In a war where the morale of the nation is of primary importance I cannot conceive of information more useful to the enemy than this book written by the Diplomatic Adviser to the British Government I know nothing of how good or bad our propaganda is, but I do know Germany well, and have not the slightest hesitation in saying we may as well close down our propaganda if there is to be freedom given to members holding high office in Government circles to strengthen Germany's resistance. I can hear the coarse laughter of the more brutal Nazi leaders when they realise the weapon they have been given and when they see how they can use it, as they will, to the strengthening of the resolve of men who hating National Socialism yet love Germany, and reading that book will be determined to fight as never before.

Hitler's most dangerous and powerful characteristic is an almost mediumistic power of Identifying himself with things that are in the minds of Germans—often enough his identification has been with the brutal and pathological elements in the nation, but if this had been all then the force of Nationai Socialism would not have shaken the world. Much more dangerously and powerfully he has at times iden- tified himself with certain legitimate and even idealistic aspirations of sections of the German people who somehow combined genuine re- vulsion at much Nazi ideology with a certain allegiance to Hitlei along limited lines. Later most of these people suffered bitter dis- illusion. But there was one point—and one point only—where Hitler united Germany, namely, when he identified himself with and sym- bolised for millions a deeply concealed fear in the hearts of Germans of all classes—the fear they tnemselves called "the fear of existenz." (Existenz being a much more comprehensive word than existence.) Here the defeated army, the unemployed intellectual and the half- starved workman shared a common fear and in the early days of the revolution Hitler showed supreme, if devilish, insight in knowing just how to use that fear for existenz in ways it is not the purpose of this letter to discuss.

What I am concerned to point our is, that I do not believe, especi- ally as war weariness grows, that the threat of military defeat alone would call forth the full passion and strength of the German nation. But Sir Robert Vansittart. at least by 'mplication and in language savouring of Nazi violence of expression, raises this threat to existenz, and in so doing will move every German who reads it to almost supreme endurance, and the Nazis will know at once how to exploit it. In the realm of propaganda this seems to lx a blunder of the first magnitude. Propaganda may influence people at conscious and superficial level or it may if skilful enough be less concerned with the more superficial attitudes of mind and going deeper affect much more profoundly the power of resistance either strengthening it or weakening it. I consider Sir Robert Vansittart has put out a piece of propa- ganda which will affect sometning very profound in the German mind, and in SO doing ivill strengthen greatly the power of resistance of every German who reads this indictment. The moment of publication is Particularly ill-chosen, for it is I think interesting to note how often the German both individually and collectively is at his weakest moment when he gets to his "second thoughts.' (Incidentally, this is where he differs so completely from the Britisher, often at his strongest when he gets his second wind.) Vast numbers of Germans who were elated by the swift victories of last spring must now have got through that elation to the inevitable period of questioning, and it is just at such a point propaganda can be most effective, especially if not superficial Propaganda but levelled with some subtlety and understanding, and it L8 peculiarly distressing that such a moment should be chosen for broad- casting something which not only will but indeed should unite every German who is not a retrograde.

In addition I am convinced that Sir Robert Vansittart's book will bring discouragement to many, especially of the younger generation in this country. Many of us may, while wishing we could have a statement of peace aims, acc,.pt the verdict of the Prime Minister that the time is not ripe, but at least we remain jealous that nothing should come from Government circles which Indicates we are preparing for a much worse rather than a better world In concluvon, may I repeat that there are loftier grounds, those ot scholarship and justice and decent human relationships, on which this bookie' may and I hope will be attacked, both in this country and in America, but the purpose of this is but to make one point? If in the relentless prosecution of this war our resolution is to be stiffened to face even grimmer days ahead, if we can afford no mistakes in the military and naval sphere, if we are to strengthen our defences and increase our offensive, and if indeed we are wholly committed to leave nothing undone in our determination not only to gain victory but victory as quickly as possible, then I think it not unreasonable in the name of that efficiency to challenge a Diplomatic Adviser to the Government who commits a major blunder in propaganda and increases the risk of prolonging the