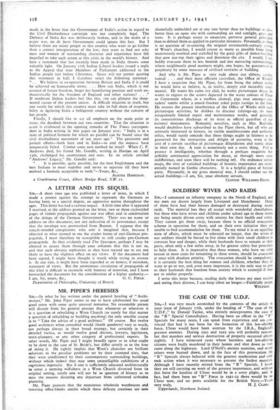 Stn,—I command an infantry company in the North of England, and my men are drawn largely from Liverpool and Manchester. Many of them have had their houses damaged or destroyed during recent raids. The material loss they all accept with wonderful cheerfulness, but those who have wives and children under school age in these towns are being nearly driven crazy with anxiety for their health and safety. They cannot get them away, because there is no official evacuation scheme in operation for them, and on their own initiative they are unable to find accommodation for them. To my mind it is an appalling state of affairs, which must be tolerated no longer, that the wives of our soldiers should be forced to live alone with their small children in constant fear and danger, while their husbands have to remain at their posts, often only a few miles away, in far greater safety but powerless to help them. It is imperative that these women, who have no valid reason in most cases for remaining in these towns, should be evacuated at once with absolute priority. The evacuation should be compulsory ; it is certainly the best thing for women and children, whether they all want to go or not, and, even more important, it is the only way to give to their husbands that freedom from anxiety which is essential if they are to soldier properly.

I write this letter because, reading daily the letters my men receive and seeing their distress, I can keep silent no longer.—Faithfully yours.