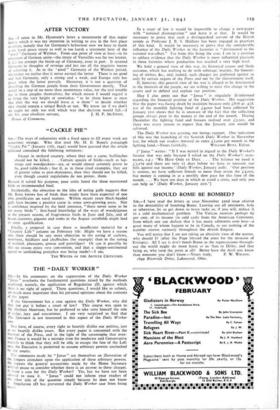 SIR,—In his comments on the suppression of the Daily Worker "Janus" overlooks the fundamental questions raised by the methods employed, namely, the application of Regulation 2D, against which there is no right of appeal. These questions, I would like to submit, are much more important than his personal opinions about the contents of the paper.

If the Government has a case against the Daily Worker, why did they not put it before a court of law? This course was operi to Mr. Herbert Morrison, but he preferred to take unto himself the role of judge, jury and executioner. I am very surprised to find that The Spectator is not interested in this aspect of the Daily Worker case.

You have, of course, every right to heartily dislike our politics, just as we heartily dislike yours. But every paper. is concerned with the freedom of the Press, and in the light of the catastrophe that over- took France it would be a mistake even for moderate and Conservative tturnals to think that they will be able to escape the fate of the Left once the Executive is permitted to assume arbitrary powers unchecked by the courts.

The comments made by "Janus" are themselves an illustration of the dangers attendant upon the application of these arbitrary powers. He repeats the general accusations made by the Home Secretary Without pause to. consider whether there is an answer to these charges Is there a case for the Daily Worker? Yes, but we have not been allowed to state it. "Janus" could not inform your readers of the other side of the question simply because he does not know It- Regulation 2D has prevented the Daily Worker case from being heard. In a court of law it would be impossible to charge a newspaper with "national disintegration" and leave it at that. It would be necessary to prove that such a distinguished servant of the British people as Professor J. B. S. Haldane has been engaged in practices of this kind. It would be necessary to prove that the considerable influence of the Daily Worker in the factories is "detrimental to the national war-effort." Far from this being the case, I am in a position to adduce evidence that the Daily Worker is most influential precisely in those factories where production has reached a very high level.

We hold a general view of this war, its historical causes and likely outcome, which has nothing to do with sabotage,' mutiny, the foment- ing of strikes, &c., and, indeed, such charges are preferred against us only by certain organs of the Press and not by the Government itself.

If, however, this general view of the war is alleged to be detrimental to the interests of the people, we are willing to meet this charge in the courts and to defend and explain our position.

May I also point out that "Janus" is singularly ill-informed regarding the financial position of the Daily Worker. His suggestion that the paper was facing death by inanition because only £876 4s. aid. out of the monthly fighting fund of £4,000 had been collected by January 2ist shows that he is unaware of the fact that the collecting groups always pour in the money at the end of the month. During December the fighting fund and bazaars realised over £5,500, and there was every reason to expect that the January aim would be achieved.

The Daily Worker was gaming, not losing a support. One indication of this was the launching of the Scottish Daily Worker in November last, for which our readers donated an extra £1,000 per month to the

[" Janus" writes: "If I was misled in regard to the Daily Worker's finance that was only because I relied on the Daily Worker's state- ments, e.g.: 'We Have Only ii Days. . . . The balance we need is L3,179 and there are only it days before we have to measure our bills against our income' (Daily Worker, January 20th). 'Our position is serious, we have sufficient friends to more than attain the L4,000, but money is coming in at a terribly slow pace for this time of the month. ... We have ten days in which to avoid a crisis, and only you can help us' (Daily Worker, January 215t."]