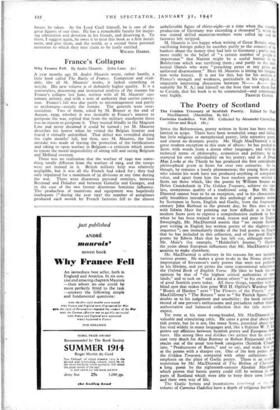 A FEW months ago M. Andre Maurois wrote, rather hastily, a little book called The Battle of France. Competent and read- able, like all M. Maurois' works, it lacked something in weight. His new volume is of definitely higher quality. It is a remorseless, discerning and instructed analysis of the reasons for France's collapse last June, written with all M. Maurois' cus- tomary artistry, and with a note of authority that carries convic- tion. France's fall was due partly to mismanagement and partly to misfortune—mainly the former. The generals were over- confident. Two of them, asked by M. Bonnet at the end of August, 1939, whether it was desirable in France's interest to postpone the war, replied that from the military standpoint there was no reason to postpone it. They trusted blindly in the Maginot Line and never dreamed it could be turned ; yet M. Maurois describes his horror when he visited the Belgian frontier and found it virtually unfortified. That defect was remedied during the eight months' lull, but then, says M. Maurois, the fatal mistake was made of leaving the protection of the fortifications and taking to open warfare in Belgium—a criticism which seems to ignore the moral impossibility of sitting still and seeing Belgium and Holland overrun.

There was no realisation that the warfare of 1940 was some- thing totally different from the warfare of 1914, and the troops were not trained in it. British military help was relatively negligible, but it was all the French had asked for ; they had only stipulated for a maximum of 32 divisions at any time during the war. There were disastrous personal enmities, between Reynaud and Daladier and between Gamelin and Georges, and in the case of the two former disastrous feminine influence. The production of munitions and equipment was hopelessly inadequate (" during the year 1937 the number of aeroplanes produced each month by French factories fell to the almost

unbelievable figure of thirty-eight—at a time when the month* production of Germany was exceeding a thousand"); when the war started skilled munition-workers were called up and the factories left stripped. M. Maurois is less happy when writing of Great Britain, whose vacillating foreign policy he ascribes partly to the concern of tht bankers about the money they had lent to Germany ; partly (with more truth) to the belief of "a certain number of people of importance" that Nazism might be a useful barrier to the Bolshevism which was terrifying them ; and partly to the intel- lectual liberals who were "preaching peace at any price and unilateral disarmament." Here M. Maurois is letting his imagin non write history. It is not for this, but for his analysis of France's strength and weakness, particularly in his report of a singularly interesting discussion between N— A— (pre. sumably Sir N. A.) and himself on the boat that took them both to Canada, that his book is to be commended—and commended