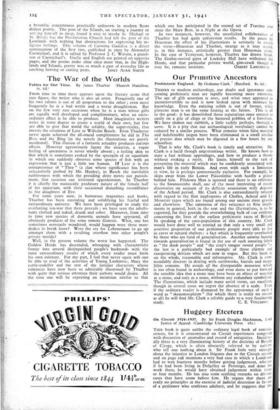 The War of the Worlds

FROM time to time there appears upon the literary scene that rare figure, the writer who is also an artist. Frequently one of his two talents is out of all proportion to the other ; even more frequently he is a bad writer and a worse draughtsman. But on the few very rare occasions when he is a man whose gifts are equally well developed and complimentary, what an extra- ordinary effect is he able to produce. Most imaginative writers strive in some degree to create a world of their own, but few are able to give that world the solidity, the super-reality, that invests the creations of Lear or Wilhelm Busch. Even Thackeray never again achieved the all-round completeness he did in The , Rose and the Ring (in the novels the illustrations are purely incidental). This illusion of a fantastic actuality produces curious effects. However uproariously funny the situation, a vague feeling of uneasiness is never wholly absent ; a feeling akin to that which is sometimes evoked by the spectacle of an aquarium in which one suddenly observes some species of fish with an expression that is just a little too human. hi Lear it is the omnipresence of " They " (a clan whose significance has been exhaustively probed by Mr. Huxley), in Busch the inevitable ruthlessness with which the presiding deity metes out punish- ment, that occasion our irrational apprehension. In Thurber it is chiefly the maniacally predatory nature of the female half of his aquarium, with their occasional disturbing resemblance to the daughters of Eve.

For some years now, in humorous magazines and books, Thurber has been extending and solidifying his fearful and extraordinary universe. We have been privileged to study the everlasting sex-war that there prevails ; we have seen the inhabi- tants clothed and naked, drunk and sober. Moreover, from time to time new species of domestic animals have appeared, all obviously products of the same remote Genesis. What one has sometimes nervously wondered, would happen were these man- drakes to break loose? Were the cry for Lebensraum to go up amongst them with a resulting overflow into other people's private worlds?

Well, in the present volume the worst has happened. The Golden Horde has descended, whooping with characteristic frenzy into several distinguished people's backyards with• the most extraordinary results of which every reader must form his own estimate. For my part, I feel that never again will. one be able to read of the, activities of Young Lochinvar, Mary the cattle-yodeller and the rest of the. familiar, characters whose romances have now been so admirably illustrated by Thurber with quite that serious attention their authors would desire. All the time one will be expecting an incursion similar to that

which one has anticipated in the second act of Traviata ever since the Marx Bros. in a Night at the Opera.

In two instances, however, the unsolicited collaboration of Thurber has had quite unforeseen results. In the poem by Housman the effect of his illustrations is seriously to enricii the verse—Housman and Thurber, strange as it may sound, is, in this instance, artistically greater, than Housman alone. In the case of Tennyson; however, Thurber has drawn blank. The Gothic-revival gates of Locksley Hall have withstood the Horde, and that particular private world, gim-crack though it