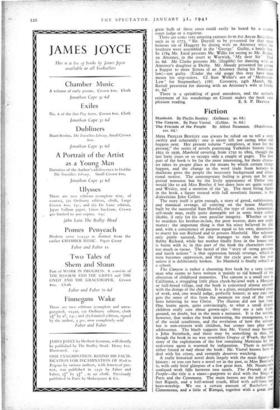 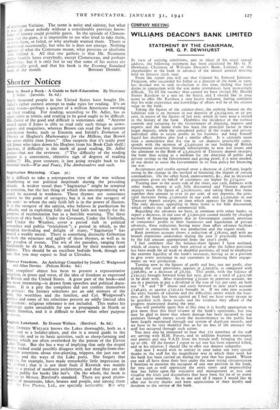 The Friends of the People By Alfred Neumann. (Hutchinson. to& 6d.) MISS PHYLLIS BENTLEY can always be relied on to tell a ston. swiftly and coherently : one is never left not caring what will happen next. Her present volume "completes, at least for the present," the series of novels portraying Yorkshire history from 1625 10 1936, Manhold covering from 1720 to 1805, though the last forty years or so occupy only a couple of pages. The first part of the book is by far the most interesting, for there charac- ter takes its proper place as the means by which certain things happen, and the change in the wool trade from kerseys to shalloons gives the people the necessary background and direc- tional motive. The contemporary feeling is given not by any period nonsense but by the lively appearance of Defoe (one would like to ask Miss Bentley if her dates here are quite sound' and Wesley, and a mention of the '45. The most living figure in the book, a figure treated with full novelistic licence, is the dialectician John Collier.

The story itself is grim enough, a story of greed, ruthlessness, and maniacal revenge, all centring on the house Manhold, built by the successful Sam Horsfall, the type of irate, tyrannical, self-made man, really quite damnable yet in some ways rather likable, if only for his own peculiar integrity. Whether or not he murders his brother-in-law, the poor weaver, does not really matter : the important thing is that his niece believed he did, and, with a consistency of purpose equal to his own, determines to marry his son Richard and to possess Manhold. Her schemes only partly succeed, but she manages to ruin the all-too- flabby Richard, while her mother finally lives in the house and is burnt with it; in this part of the book the characters move too much in vacuo. The moral of this "story of -trong passions and harsh actions" is that oppression breeds revenge, which in turn becomes oppression, and that the cycle goes on for ever unless it is deliberately broken. So Manhold is finally rebui:t as a school.

The Canyon is rather a charming first book by a very young man who seems to have written it mainly to rid himself of the obsession of childhood memories. The canyon is a small one in California, a struggling little place cheek-by-jowl with a Mexican or half-breed village, and the book is concerned almost entirely with the doings of the children. It is a plain, straightforward piece of work, and, one would judge, perfectly honest; at any rate one gets the sense of this from the moment we read of the small hero believing he was Christ. The illusion did not last long. One learns again, quite convincingly, to what a small degree children really care about grown-ups : they are a safe back- ground, no doubt, but in the main a nuisance. It is the setting, however, that makes the book interesting, the strangeness, to us, of the social conditions and the revelation of how the colour bar is non-existent with children, but comes into play with adolescence. The blurb suggests that Mr. Viertel may become a John Steinbeck, and there may be something in this, for though the book in no way resembles Grapes of Wrath, the finsi story of the exploitation of the few remaining Mexicans by the real-estate agent is warmed by indignation. There is nothing either forced or nail about the book : Mr. Viertel knows how to deal with his crises, and certainly deserves watching. A really historical novel deals largely with the main figures d history: or you can have a novel set in the past, as Miss Bentle)'s is, with only brief glimpses of a few great men. Mr. Neumann's confused work falls between two stools. The Friends of dig, People—the title is a sneer—purports to deal with the Siege or Paris and the Commune. The main heroes are the police Pre: fect Rigault, and a half-witted youth, filled with calf-love ana, hero-worship. We see a certain amount of Rochefort. ot Clemenceau, and a little of Blanqui, together with a great deal of irrelevant Verlaine. The scene is noisy and sinister, but what it was all about nobody without a considerable previous know- ledge of history could is guess. In the episode of Clemen- ceau and the guns, it s impossible to see who tried to take them, or took them, or.failed, or why anybody wanted them. Thiers is mentioned occasionally, but who he is does not emerge. Nothing ippears of what the Commune meant, what passions or idealisms xere behind it. All that one gathers is that Mr. Neumann pretty heartily hates everybody, except Clemenceau, and perhaps Gambetta : but it is only fair to say that some of his scenes are dramatically good, and that his book is the Evening Standard