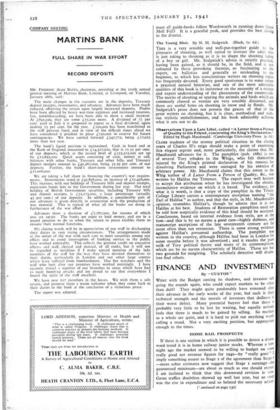 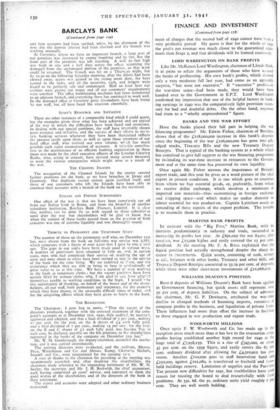 WHAT with the Budget casting its shadows, and invasion talk going the rounds again, who could expect markets to be other than dull? They might quite pardonably have retreated after their advance in the early weeks of the year, buf such is their technical strength and the morale of investors that dullness i5 their worst defect. Many potential buyers feel that there i5 probably very little to be lost by waiting, but equally nobody feels that there is much to be gained by selling. So markets as a whole are quiet, and it is hard to pick out anything worth calling a trend. Not a very exciting position, but appropriate enough to the times.

If there is one section in which it is possible to detect a down- ward trend it is in home railway junior stocks. Whereas a fort- night ago the market seemed to be willing to budget on song really good net revenue figures for 1940—by "really good" I imply something nearer to Stage 2 of the agreement than Stage' —more sober estimates now suggest that Stage r earningS--the guaranteed minimum—are about as much as one should expect. I am inclined to think that this downward revision is wise. Gross traffics doubtless showed up well last year, but so steel) was the rise in expenditure and so belated the necessary adjust' ontinued on page 130)

(Continued from page 128) ment of charges that the second half of 1940 cannot have been a very profitable period My guess is that for the whole 01 1940 the pool's net revenue was much closer to the guaranteed mini- mum than Stage 2, and that dividends will be framed cautiously.

Like Mr. McKenna Lord Wardington, chairman of Lloyds Bank, is at pains to refute the arguments of those who have accused the banks of profiteering. His own bank's profits, which showed only a very moderate fall last year, had come as an agreeable surprise, "but were not excessive." If " excessive " profits—in the war-time sense—had been made, they would have been handed over to the Government in E.P.T. Lord Wardington confirmed my impression that one of the helpful factors in bank- ing earnings in 1940 was the comparatively light provision neces- sary for bad and doubtful debts. On the other hand, expenses had risen to a "wholly unprecedented" figure.

BANKS AND THE WAR EFFORT

Have the banks played their full part in helping the war firiancing programme? Mr. Edwin Fisher, chairman of Barclays, shows that of the £118,000,000 increase in this bank's deposits since the beginning of the war £1o6,00o,000 has gone into gilt- edged stocks, Treasury Bills and the new Treasury Deposit Receipts. That is typical of the banking system as a whole which has contrived to give full support to the war financing programme by re-:ending its war-time increase in resources to the Govern- ment and at the same time has preserved its own liquidity.

Once again Mr. Fisher stresses the importance of Britain's export trade, and this year he gives us a word picture of the ideal export in present conditions. It is one which goes to countries from whom we buy essential goods, or, preferably, from whom we receive dollar exchange, which involves a minimum of imported raw materials—thus economising in foreign exchange and shipping space—and which makes no undue demand on labour essential for war production. Captain Lyttelton needs no reminding of these aspects of the export problem. The trouble is to reconcile them in practice.

In contrast with the "Big Five," Martins Bank, with its interests predominantly in industry and trade, succeeded in increasing its profits last year. At £891,029 the net figure, after taxat:on, was £15,oco higher and easily covered the 15 per cent. dividend. At the meeting Mr. F. A. Bates explained that the liquid position had actually strengthened despite the sharp in- crease in investments. Quick assets, consisting of cash, money at call, balances with oth,tr banks, Treasury and other bills, and Treasury Deposit Receipts amounted to 33.29 per cent. of deposits, while there were other short-term investments of £1106,000.

Reco:d deposits of Williams Deacon's Bank have been applied in Government financing, but quick assets still represent over 50 per cent. of deposit _liabilities. On the subject of advances the chairman, Mr. G. P. Dewhurst, attributed the war-time decline to changed methods of financing imports, retention of company profits in the business, and liquidation of private loans. These influences had more than offset the increase in facilities to those engaged in war production and export trade.

Once again F. W. Woolworth and Co. has made up in the reception areas much more than it has lost in the evacuation areas, profits having established another high record for 1940 at the huge total of £7,958,159. This is a rise of £345,003, or about 44 per cent. on the 1939 figure, and easily covers the 65 Per cent, ordinary dividend after allowing for £4,310,910 tax pro' vision. Another kr to,000 goes to staff benevolent fund and L25o,00o, against Dox,o8o, is transferred to freehold-and lease- hold buildings reserve. Limitation of supplies and the Purchase Tax present new difficulties for 194i, but stockholders have good reason for trusting the board to deal resourcefully with fresh problems. At 55s. 6d. the 5s. ordinary units yield roughly 6 Per cent. They are well worth holding.