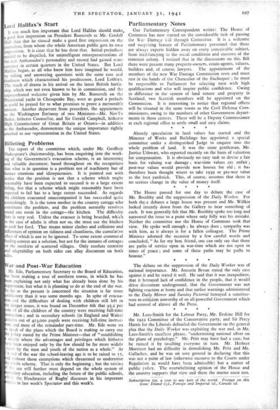 The House paused for one day to debate the case

of Mr. Boothby and the suppression of the Daily Worker. For both the:e debates a large house was present and Mr. Willkie looked intently down from the Gallery to hear something of each. It was generally felt that Mr. Boothby spoke too long and narrowed the issue to a point where only folly was his mistake. Neither the committee nor the House of Commons took that view. He spoke well enough ; he always does ; sympathy was with him, as it always is for a fallen colleague. The Prime Minister adorned the occasion by a few careful words and concluded, "As for my hon. friend, one can only say that there are paths of service open in war-time which are not open in times of peace ; and some of these paths may be paths to honour."