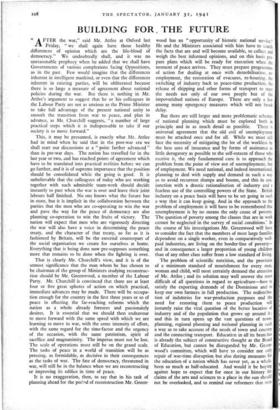 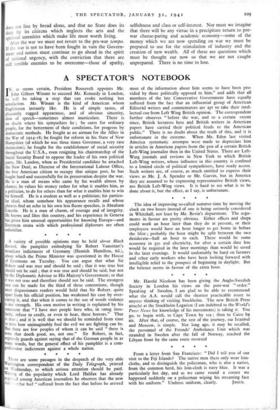 BUILDING FOR THE FUTURE

cc AFTER the war," said Mr. Attlee at Oxford last Friday, "we shall again have those healthy differences of opinion which are the life-blood of democracy." We undoubtedly shall, and it was no unreasonable prophecy when he added that we shall have Governments of various complexions facing Oppositions, as in the past. Few would imagine that the differences inherent in intelligent mankind, or even that the differences inherent in existing parties, will be obliterated because there is so large a measure of agreement about national policies during the war. But there is nothing in Mr. Attlee's argument to suggest that he or his colleagues in the Labour Party are not as anxious as the Prime Minister to take full advantage of the present national unity to smooth the transition from war to peace, and plan in advance, as Mr. Churchill suggests, "a number of large practical steps which it is indispensable to take if our society is to move forward."

This, it may be presumed, is exactly what Mr. Attlee had in mind when he said that in the post-war era we shall start our discussions at a "point farther advanced " than in pre-war days. The nation has travelled far in the last year or two, and has reached points of agreement which have to be translated into practical realities before we can go further, and it is of supreme importance that the position should be consolidated while the going is good. It is unbelievable that the colleagues of today who are working together with such admirable team-work should decide instantly to part when the war is over and leave their joint labours half finished. No one knows what the future has in store, but it is implicit in the collaboration between the parties that the men who are co-operating to win the war and pave the way for the peace of democracy are also planning co-operation to win the fruits of victory. The nation will expect that men who are vigorously directing the war will also have a voice in determining the peace treaty, and the character of that treaty, so far as it is fashioned by Britain, will be the external counterpart of the social organisation we create for ourselves at home. Everything that is being done now pre-supposes something more that remains to be done when the fighting is over.

That is clearly Mr. Churchill's view, and it is of the utmost significance that the man whom he has chosen to be chairman of the group of Ministers studying reconstruc- tion should be Mr. Greenwood, a member of the Labour Party. Mr. Churchill is convinced that there are at least four or five great spheres of action on which practical, immediate advances may be made. There will be occupa- tion enough for the country in the first three years or so of peace in effecting the far-reaching reforms which the nation as a whole already foresees and passionately desires. It is essential that we should then endeavour to move forward with the same speed with which we are learning to move in war, with the same intensity of effort, with the same regard for the time-factor and the urgency of the occasion, with the same patriotism, spirit of sacrifice and magnanimity. The impetus must not be lost. The scale of operations must still be on the grand scale. The tasks of peace in a world of transition will be as pressing, as formidable, as decisive in their consequences as the tasks of war. The fate of democracy, threatened in war, will still be in the balance when we are reconstructing or improving its edifice in time of peace.

It is no exaggeration, then, to say that in his task of planning ahead for the pe6--,1 of reconstruction Mr. Green- wood has an "opportunity of historic national service." He and the Ministers associated with him have to search the facts that are and will become available, to collect and weigh the best informed opinions, and on this basis pre- pare plans which will be ready for execution when the moment of peace arrives. They must prepare programmes of action for dealing at once with demobilisation, re- employment, the restoration of evacuees, re-housing, the switching of industry back to peace-time production, the release of shipping and other forms of transport to meet the needs not only of our own people but of the impoverished nations of Europe. These are only a few among many emergency measures which will not brook delay.

But there are still larger and more problematic schemes of national planning which must be explored both in principle and in as much detail as possible. There is universal agreement that the old evil of unemployment must be attacked once and for all. While we must still face the necessity of mitigating the lot of the workless by the best uses of insurance and by forms of assistance as little derogatory as possible to the self-esteem of those who receive it, the only fundamental cure is to approach the problem from the point of view not of unemployment, but of employment. We need national, and indeed international, planning to deal with supply and demand in such a way as to avoid recurrent slumps and booms, and this in con- junction with a drastic rationalisation of industry and a fearless use of the controlling powers of the State. British industry on a peace basis will have to be set going in such a way that it can keep going. And in the approach to the problem of employment it will have to be remembered that unemployment is by no means the only cause of poverty. The question of poverty among the classes that are in work cannot be neglected in the survey of social conditions. In the course of his investigations Mr. Greenwood will have to consider the fact that the members of most large families dependent on a single worker, even in comparatively well- paid industries, are living on the border-line of poverty— and in consequence a larger proportion of young children than of any other class suffer from a low standard of living.

The problem of scientific nutrition, and the provision of a minimum standard of nourishment for every man, woman and child, will most certainly demand the attention of Mr. Attlee ; and its solution may well answer the most difficult of all questions in regard to agriculture—how to satisfy the exporting demands of the Dominions and to keep our own farmers in full production. The redistribu- tion of indurstries for war-production purposes and the need for restoring them to peace production will instantly raise the vital question of the better location of industry and of the population that grows up around it; and this in turn opens up the vast questions of town planning, regional planning and national planning in such a way as to take account of the needs of town and country and the connecting transport. Education in all its branches is already the subject of constructive thought at the Board of Education, but cannot be disregarded by Mr. Green- wood's committee, which will have to consider not only repair of war-time disruption but also daring measures for the education of a nation which has never yet, as a whole, been so much as half-educated. And would it be hoping against hope to expect that for once in our history the claims of the arts and sciences to a place in the sun should not be overlooked, and to remind our reformers that ma° does not live by bread alone, and that no State does its duty by its citizens which neglects the arts and the spiritual amenities which make life most worth living. After the war we must not revert to the pre-war tempo. If the war is not to have been fought in vain the Govern- ment and nation must, continue to go ahead in the spirit of national urgency, with the conviction that there are still terrible enemies to be overcome—those of apathy, selfishness and class or self-interest. Nor must we imagine that there will be any virtue in a precipitate return to pre- war cheese-paring and academic economy—some of the money which we are now spending on war we must be prepared to use for the stimulation of industry and the creation of new wealth. All of these are questions which must be thought out now so that we are not caught unprepared. There is no time to lose.