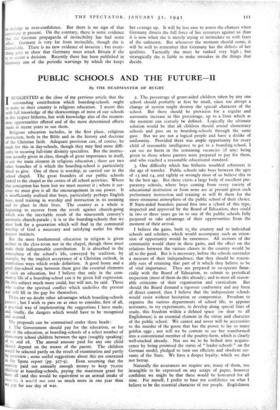 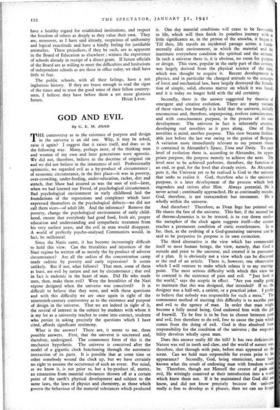 PUBLIC SCHOOLS AND THE FUTURE-II

By THE HEADMASTER OF RUGBY

ISUGGESTED at the close of my previous article that the 1 outstanding contribution which boarding-schools ought to make to their country is religious education. I assert this with full knowledge of the shortcomings of most of our schools in this respect hitherto, but with knowledge also of the tremen- dous opportunities offered and of the more determined efforts made in recent years to use them.

Religious education includes, in the first place, religious instruction, both in the Bible and in the history and doctrine of the Christian faith. Adequate provision can, of course, be made for this in day-schools, though they may find more diffi- culty in securing full-time divinity specialists. But the instruc- tion actually given in class, though of great importance in itself, is not the main element in religious education ; there are two other branches of it which the boarding-school is particularly fitted to give.- One of these is worship, as carried out in the school chapel. The great foundeis of our public schools looked to the chapel as the centre of all school activities. Where that conception has been lost we must recover it ; where it sur- vives we must give it all the encouragement in our power. It is insufficiently realised that boys, particularly perhaps English boys, need training in worship and instruction in its meaning and its place in their lives. The country as a whole is beginning to recover from the revolt against church-going which was the inevitable result of the nineteenth century's automatic church-parade ; it is to the boarding-schools that we must look for a generation which will find in the communal worship of God a necessary and satisfying outlet for their deepest instincts.

But the most fundamental education in religion is given neither in the class-room nor in the chapel, though these must make their indispensable contribution. It is absorbed in the atmosphere of the school's life, conveyed by tradition, by example, by the implicit acceptance of a Christian outlook, in numberless ways which evade definition. A good home and a good day-school may between them give the essential elements of such an education, but I believe that only in the com- munity life of a boarding-school can it be given full expression. On this subject much more could, but will not, be said. Those who realise the spiritual conffict which underlies the present war will fill in the gap for themselves.

There are no doubt other advantages which boarding-schools Possess; but I wish to pass on at once to consider, first of all, a practical way of implementing the suggestions I have made, and, finally, the dangers which would have to be recognised and averted.

The proposals can be summarised under three heads: I. The Government should pay for the education, or for part of the education, at boarding-schools of a select number of elementary school children between the ages (roughly speaking) ofii and x8. The annual amount paid for any one child should depend on the means of the parent. The children would be selected partly on the result of examination and partly by interview ; some useful suggestions about this are contained In the Spens report (pp. 327-9). Even assuming that the Ccloolry paid out annually enough money to keep 7o,000 Children at boarding-schools, paying the maximum grant for to all (and this would be equivalent to an annual intake of 10,0-00), it would not cost us much more in one year than we pay for one day of war. 2. The percentage of grant-aided children taken by any one school should probably at first be small, since too abrupt a change of system might destroy the special character of the school. But there should be provision for a regular and automatic increase in this percentage, up to a limit which at the moment can scarcely be defined. Logically the ultimate solution would be that all children should attend elementary schools and pass on to boarding-schools through the same gate. But we are not a logical people and have a dislike of uniformity. Provided there was ample opportunity for every child of reasonable intelligence to get to a boarding-school, I can see no harm in the remaining vacancies (if any) being given to those whose parents were prepared to pay for them, and who reached a reasonable educational standard.

3. One difficulty which has hitherto troubled reformers is the age of transfer. Public schools take boys between the ages of 13 and 14, and rightly or wrongly most of us believe this to be the best age. But there exists a large body of excellent pre- paratory schools, where boys coming from every variety of educational institution or from none are at present given such preliminary instruction and training as will fit them for the more strenuous atmosphere of the public school of their choice. If State-aicled boarders passed first into a school of this type, inspected and approved by the Board of Education, they could in two or three years go on to one Of the public schools fully prepared to take advantage of their opportunities from the moment of their arrival.

I believe the gains, both to the country and to individual schools and scholars, which would accompany such an exten- sion of opportunity would be enormous. All sections of the community would share in these gains, and the effect on the relations between the various classes in the country would be all to the good. But it is necessary, before the schools surrender a measure of their independence, that they should be reason- ably sure of retaining that part of it which they believe to be of vital importance. They are prepared to co-operate finan- cially with the Board of Education, to submit to periodical inspection (most of them do this already), and to meet all reason- able criticisms of their erganisation and curriculum. But should the Board demand a rigorous conformity and any form of direct control, then I believe that the independent schools would resist without hesitation or compromise. Freedom to organise the various departments of school life, to appoint assistants, to try experiments, to develop along special lines of study, this freedom within a defined space (so dear to all Englishmen) is an essential element in the virtue and character of the public school. We cannot and never will be accessories to the murder of the goose that has the power to lay so many golden eggs ; nor will we be content to see her transformed into a conventional member of the poultry-farm, which is clearly well-stocked already. Nor are we to be bribed into acquies- cence by being promised the status of " leader-schools " on the German model, pledged to turn out efficient and obedient ser- vants of the State. We have a deeper loyalty, which we dare not betray.

Naturally the assurances we require are, many of them, too intangible to be expressed on any scraps of paper, however confident we might be that these would be honoured for all time. For myself, I prefer to base my confidence on what I believe to be the essential character of our people. Englishmen have a healthy regard for established institutions, and respect the freedom of others as deeply as they value their own. They are, moreover, as I have said already, suspicious of uniformity and logical exactitude and have a kindly feeling for justifiable anomalies. These prejudices, if they be such, are as apparent in the Board of Education as elsewhere ; witness the experience of schools already in receipt of a direct grant. If future officials of the Board are as willing to meet the difficulties and hesitations of independent schools as are those in office today, we shall have little to fear.

The public schools, with all their failings, have a not inglorious history. If they are brave enough to read the signs of the times and to trust the good sense of their fellow country- men, I believe they have before them a yet more glorious