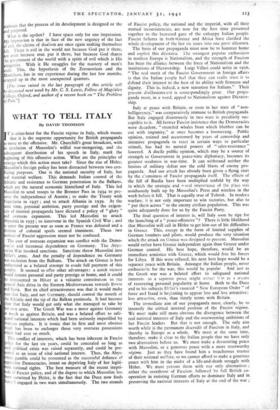 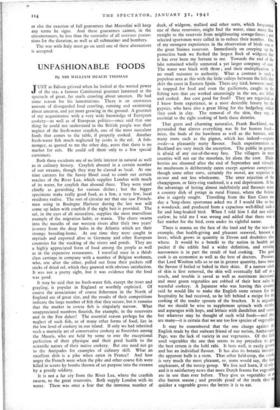 WHAT TO TELL ITALY

T is crisis-hour for the Fascist regime in Italy, which means that it is the supreme opportunity for British propaganda move to the offensive. Mr. Churchill's great broadcast, with s revelation of Mussolini's wilful war-mongering, and the bsequent distribution of his speech in Italy, mark the nning of this offensive action. What are the principles of trategy which this action must take? Since the rise of Hitler, ssolini's foreign policy has been distracted between two con- 'eting purposes. One is the national security of Italy, her eal material welfare. This demands Italian control of the driatic and resistance to German penetration in the Balkans, tech are the natural economic hinteiland of Italy. This led lussolini to send troops to the Brenner Pass in 1934 to pre- rye the independence of Austria ; to make the Treaty with ugoslavia in 1937; and to attack Albania in 1939. At the me time, personal ambition, party prestige and the exigen- les of internal propaganda have dictated a policy of " glory " ml overseas expansion. This led Mussolini to attack byssinia in 1935 ; to intervene in the Spanish Civil War ; and o enter the present war as soon as France was defeated and a vision of colonial spoils seemed imminent. These two otives of Fascist-aggression must not be Confused.

The cost of overseas expansion was conflict with the Demo- races and increased dependence on Germany. The Abys- Man War invoked sanctions. Sanctions threw Mussolini into let's arms. And the penalty of dependence on Germany as exclusion from the Balkans. The attack on Greece is best derstood as a belated attempt to evade full payment of this nalty. It seemed to offer other advantages: a quick victory ould restore personal and party prestige at home, and it could represented to Hitter as a valuable contribution to the eneral Axis drive in the Eastern Mediterranean towards Eqvnt d Syria. But its chief attractiveness was that it would make ore that Italy, and not Germany, should control the mouth of he Adriatic and the tip of the Balkan peninsula. It had become lear that Italy would get only what she managed to take by er own arms. The Greek War was a move against Germany s much as against Britain, and was a belated effort to safe- uard national interests which had been seriously imperilled by verseas exploits. It is ironic that its first and most obvious suit has been to endanger those very overseas possessions hich had cost so much.

This conflict of interests, which has been inherent in Fascist hey for the last six years, could be concealed so long as ach political crisis was raised separately, and could be pre- med as an issue of vital national interest. Thus, the Abys- nian gamble could be presented as the successful defiance of gressive Democracies, intent on depriving Italy of her legiti- ate national rights. The best measure of the recent inepti- de of Fascist policy, and of the degree to which Mussolini has n outwitted by Hitler, is the fact that the Duce now finds irrse.f engaged in two wars simultaneously. The two. strands of Fascist policy, the national and the imperial, with all their mutual inconsistencies, are now for the first time presented together to the bemused gaze of the unhappy Italian people.

Fascist failures in both •Greece and Africa have clarified the whole development of the last six years into one great dilemma. The basis of our propaganda must now be to hammer home and exploit this dilemma. The strongest popular enthusiasm in modern Europe is Nationalism, and the strength of Fascism has been the alliance between the force of Nationalism and the institutions of Dictatorship. Luigi Villari could write in 1926, "The real merit of the Fascist Government in foreign affairs is that the Italian people feel that they can really trust it to defend their interest to the best of its ability with firmness and dignity. This is, indeed, a new sensation for Italians." Their present disillusionment is correspondingly great. Our propa- ganda must, in a word, appeal to Nationalism against Dictator- ship.

Italy at peace with Britain, or even in her state of "non- belligerency," was comparatively immune to British propaganda. But Italy engaged disastrously in two wars is peculiarly sus- ceptible to it. All former Fascist insistence that the Democracies were decadent, "stranded whales from which blubber can be cut with impunity," at once becomes a boomerang. Public opinion, trained and accustomed by years of censorship and intensive propaganda to react in certain ways to particular stimuli, has had its natural powers of " sales-resistance " lowered. A docile public opinion, which may be a source of strength to Government in peace-time diplomacy, becomes its greatest weakness in war-time. It can withstand neither the bruises of military defeat nor the cold blasts of enemy pro- paganda. And our attack has already been given a flying start by the eumsiness of Fascist propaganda itself. The effects of the fall of Bardia have been multiplied tenfold by the way in which the strategic and moral importance of the place was assiduously built up by Mussolini's Press and wireless in the week before it fell. That is equally true of Tobruk. In modern warfare, it is not only important to win victories, but also to "put them across" to the enemy civilian population. This was quite adequately done for us by the Fascist Party.

The final question of interest is, will Italy soon be ripe for the launching of a " peace-offensive "? There is little likelihood that Mussolini will call in Hitler to get him out of his difficulties in Greece. This, except in the form of limited supplies of German bombers and pilots, would produce the very situation which the attack on Greece was designed to prevent. Mussolini would rather have Greece independent again than Greece under German control. His best hope, therefore, would be an immediate armistice with Greece, which would free his forces for Libya. If this were refused, his next best hope would be a separate peace with Britain. Amongst the Italian people, never enthusiastic for the war, this would be popular. And just as the Greek war was a belated effort to safeguard national interests. so a separate peace might aurae h'm as a means of recovering personal popularity at home. Both to the Duce and to his subjects Hitler's vaunted "New European Order" of force and fraud is beginning to appear less and less attractive: less attractive, even, than timely terms with Britain.

The immediate aim of our propaganda must, clearly, be to intensify the critical internal position of the Fascist regime. We must make still more obvious the divergence between the real national interests of Italy and the overweening ambitions of her Fascist leaders But that is not enough. The only aim worth while is the permanent discredit of Fascism in Italy, and thereby in Europe as a whole. We must at the same time, therefore, make it clear to the Italian people that we have only two alternatives before us. We must make a devastating peace with Mussolini, or a generous peace with a more trustworthy regime. Just as they have found him a treacherous trustee of their national welfare, so we cannot afford to make a generous peace with him in the midst of a life-and-death struggle with Hitler. We must present them with our only alternatives ; either 'the overthrow of Fascism. followed by full British co- operation in resisting German efforts to dominate Italy and in preserving the national interests of Italy at the end of the war ; or else the exaction of full guarantees that Mussolini will keep any terms he signs. And these guarantees cannot, in the circumstances, be less than the surrender of all overseas posses- sions for the duration, as well as all submarine? and bombers.

The war with Italy must go on until one of these alternatives is accepted.