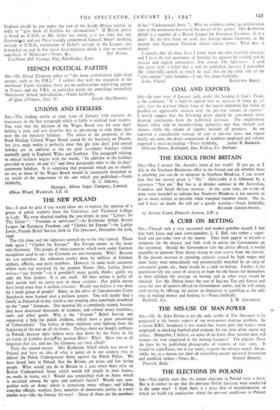 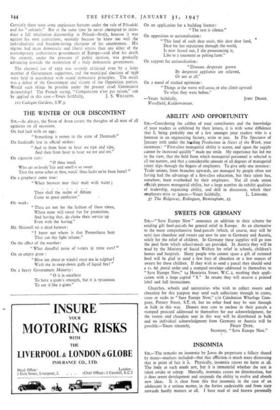 THE ELECTIONS IN POLAND

SIR,—You rightly state that the recent elections in Poland were a farce: But is it correct to say that the previous Polish elections were conducted in the same way? I think there is a great deal of misinformation on which we build cur conclusions about the pre-war conditions in Poland. Certainly there were some unpleasant features under the rule of Pilsudski and his " colonels." But at the same time he never attempted to intro- duce a full totalitarian dictatorship in Poland—firstly, because it was against his own convictions, secondly because he knew too well the individualistic and freedom-loving character of his countrymen. His regime had more democratic and liberal strains than any other of the contemporary authoritative governments of Europe—and after his death the country, under the pressure of public opinion, was gradually advancing towards the restoration of a truly democratic government.

The electoral law of 1935 was severely criticised even by a large number of Government supporters, and the municipal elections of 1938 were held in accordance with sound democratic principles. The result was a defeat of the Government and victory of the Opposition parties. Would such things be possible under the present cruel Communist dictatorship? The French saying, " Cornparaison n'est pas raison," can

be applied in this case.—Yours faithfully, J. S. WILLIAMS.