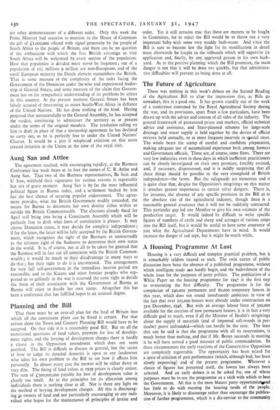 The agreement reached, with encouraging rapidity, at the Burmese Conference last week bears at its foot the names of C. R. Attlee and Aung San. That two of the Burmese representatives, Ba Sein and U Saw, withheld their signatures for various reasons is regrettable but not of grave moment. Aung San is by far the most influential political figure in Burma today, and a settlement backed by him has the best chance of securing popular endorsement. The agree- ment provides, what the British Government readily conceded, the means for Burma to determine her own destiny either within or outside the British Commonwealth. The elections already fixed for April will bring into being a Constituent Assembly which will be perfectly free to draft what form of constitution it pleases. It may choose Dominion status, it may decide for complete independence ; if for the latter, the latter will be fully accepted by the British Govern- ment, which recognises the right of the Burmans as unreservedly as the ultimate right of the Sudanese to determine their. own status in the world. It is, of course, not at all to be taken for granted that the Burmese will in fact cut all connexion with the British Common- wealth ; it would be much to their disadvantage in many ways to do that ; but their right to do it is uncontested. The arrangements for very full self-government in the immediate interim period are reasonable, and to the Karens and other frontier peoples who sup- ported us so gallantly in the war is reserved the same right to decide the form of their association with the Government of Burma as Burma will enjoy to decide her own status. Altogether this has been a conference that has fulfilled hopes to an unusual degree.