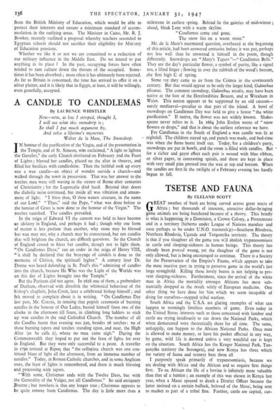 A CANDLE TO CANDLEMAS

Now—now, as low I stooped, thought I,

I will see what this snowdrop is ; So shall 1 put. much argument by, And solve a lifetime's mysteries.

T N honour of the purification of the Virgin, and of the presentation in I the Temple, and of St. Simeon, who exclaimed, " A light to lighten the Gentiles," the early Church instituted on February 2nd the Feast of Lights ; blessed her candles, placed on the altar in sheaves, and filled her basilicas with candleshine. Then the faithful took up every one a wax candle—an object of wonder outside a church—and walked through the town in procession. That was her answer to the torches men were still waving in the streets of Rome after centuries of Christianity ; for the Lupercalia died hard. • Beyond shut doors the diabolic noise continued, but inside all was vibration and amaze- ment of light. " I bless thee, 0 thou waxen creature, in the name of our Lord." " Thus," said the Pope, " what was done before to the honour of Ceres is now done to the honour of the Virgin." The torches vanished. The candles prevailed.

In the reign of Edward VI the custom was held to have become an idolatry in England, and perhaps it had ; though why one form of matter is less profane than another, why stone may be blessed but wax may not, why a church may be consecrated, but not candles that will brighten the church, are difficult questions. So the Church of England ceased to bless her candles, though not to light them. "On Candlemas Daye," ran an order in the reign of Henry VIII, " it shall be declared that the bearynge of candels is done to the memorie of Christe, the spirituall lyghte." A century later Dr. Donne was heard defending in St. Paul's this " admitting of candles into the church, because He Who was the Light of the Worlde was on this day of Lights brought into the Temple."

But the Puritans did not agree. In 1628 one of them, a prebendary of Durham, observed with disrelish the whimsical behaviour of the bishop's chaplain, John Cosin, later a- celebrated bishop himself ; and felt moved to complain about it in writing. " On Candlemas Day last past, Mr. Cozens, in renuing that popish ceremonie of burning candles in the honour of Our Ladye, busied himself from two of the clocke in the afternoon till foure, in climbing long ladders to stick up wax candles in the said Cathedral Church. The number of all the Candles burnt that evening was 220, besides 16 torches : 6o of those burning tapers and torches standing upon, and near, the High Altar (as he calls it), where no man came nigh." During the

• Commonwealth they hoped to put out the feast of lights for ever in England. But they were only successful to a point. A traveller in 1790 noticed at Ripoq that " the collegiate church was one con- tinued blaze of light all the afternoon, from an immense number of candles." Today, in Roman Catholic churches, and in some Anglican ones, the feast of lights is remembered, and there is much blessing and processing with tapers.

" With some, Christmas ends with the Twelve Days, but with the Generality of the Vulgar, not till Candlemas." So said antiquary Bourne ; but nowhere is that any longer true ; Christmas appears to be quite remote from Candlemas. The day is little more than a

milestone in earliest spring. Behind lie the gaieties of mid-winter ; ahead, bleak Lent with a warm skyline.

" Candlemas come and gone, The snow lies on a warm stone."

Mr. de la Mare's murmured question, overheard at .the beginning of this article, had been answered centuries before it was put, perhaps not less well than he answered it himself in the poem, though differently. Snowdrops are " Mary's Tapers "—" Candlemas Bells." They are the day's particular flower, a symbol of purity, like a signal too, a lifted finger ; flowing in over the rubbish of the wood's bottom, .the first high C of spring.

Some say they came to us- from the Crimea in the seventeenth century. But that would appear to be only the larger kind, Galanthus plicatus. The common snowdrop, Galanthus nivalis, may have been native at the foot of the Herefordshire Beacon, and at Wrexham in Wales. This notion appears to be supported by an old custom— surely mediaeval—peculiar to that part of the island. A bowl of snowdrops on Candlemas Day was held to give a house " the white purification." If native, the flower was not widely known. Shake- speare never refers to it. In 1664 John Evelyn wrote of " snow flowers or drops," and that is about the earliest reference we have.

For Candlemas in the South of England a wax candle was lit at • nightfall. The children stayed up, and punch was made, and bed-time was when the flame burnt itself out. Today,sfor a children's. party, snowdrops are put in bowls, and the room is filled with candles. But for a richer and gayer effect each pair is wound with blue ribbon, or silver paper, in 'contrasting spirals, and these are kept in place with very small pins pressed into the wax at top and bottom. When the candles are first lit the twilight of a February evening has hardly begun to fall.