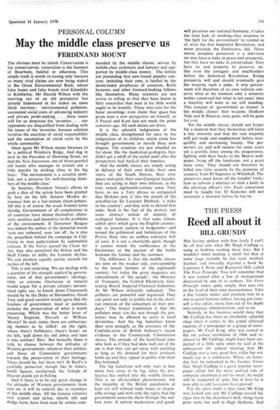 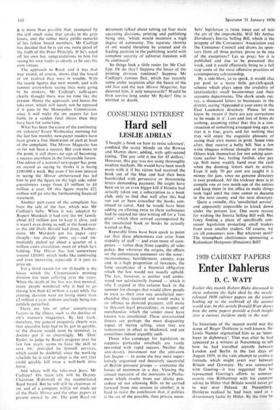 Reed all about it

Not having spoken with him lately I can't be all that sure what Mr Hugh Cudlipp is using as bedtime reading these days. But I wouldn't mind making a small bet that at some stage recently he has read, marked, learned, and inwardly digested a book by Laurence J. Peter and Raymond Hill, called The Peter Principle. You will remember that it was named after a law of management discovered by one of its authors. The Peter Principle states, quite simply, that men rise to the level of their own incompetence. Take a fine feature writer and promote him to a not-so•good features editor; having got your- self a fine editor, move him out of his depth into company administration; and so on.

Nobody in the business would deny that Mr Cudlipp has been an absolutely splendid chap when it comes to the actual editorial running of a newspaper or a group of news- papers. Mr Cecil King, who was ousted in the ire palace revolution of 1968 and re- placed by Mr Cudlipp, might have been sus- pected of a little spite when he said at the subsequent IPC annual meeting that Mr Cudlipp was a very good first violin but not much cop as a conductor. When, on Satur- day last, he remarked in the Sunday Times that 'Hugh Cudlipp is a good popular news- paper editor but the more judicial role of company chairman is not his meat', he might still be suspected of spite, but at least he is now able to add 'as events have proved'.

For the plain truth is that since Mr King was kicked out and Mr Cudlipp moved his cigar box to the chairman's desk, things have gone none too well in High Holborn. And

it is more than possible that, prompted by the still small voice that speaks in the grey hours, and the rather more public remarks of his fellow board members, Mr Cudlipp has decided that he is yet one more proof of the truth of the Peter Principle. If he's acted off his own bat, congratulations to him for seeing his own faults as clearly as he sees his own virtues.

The approach to Reed, and it was that way round, of course, shows that the board of IPC realised they were in trouble. With the yearly figures due next month, and with rumour everywhere saying they were going to be stinkers, Mr Cudlipp's colleagues clearly thought there was no time like the present. Hence the approach, and hence the take-over, which will surely not be opposed if it goes to the Monopolies Commission, since it will make the IPC papers far less liable to a sudden fatal illness than they have been for some time.

What has been the cause of the continuing 1PC sickness? Every Wednesday morning for the last few months, newspaper readers have been given a free illustration of part at least of the complaint. The Mirror Magazine has so far not been a success. But even more to the point, it still shows no sign of becoming a success anywhere in the foreseeable future. One editor of a national newspaper has gone on record as saying he thinks it is losing £100,000 a week. But even if his own interest in seeing the Mirror embarrassed has led him to put the figure on the high side, other guesstimates range from £3 million to £4 million a year. Of this figure maybe £2-} million will go into the forthcoming financial statement.

Another part-cause of the complaint has been the sale of the Sun, which was Mr Cudlipp's baby. When it was adopted by Rupert Murdoch it had cost the IPC family about £12 million just to keep it alive, and it wasn't even doing as well at the hand-over as the old Daily Herald had done. Further- more, Mr Murdoch got his paper very cheaply—too cheaply some say—and im- mediately picked up about a quarter of a million extra circulation, most of which he's holding. The Mirror has lost somewhere around 120,000, which looks like continuing and even increasing, especially if it puts its price up.

There are lots of other complicating factors in the illness, such as the decline of IPC'S women's magazines. By last week, therefore, the general prognosis clearly was that specialist help had to be got in quickly, or the disease would soon be terminal, as doctors put it so charmingly. Mr 'Don' Ryder, to judge by Reed's progress over the last few years, seems to have the skill to save 1PC, provided he himself survives, which could be doubtful, since the working schedule he is said to adopt is the sort that could quickly kill even a well-built shire horse.

And where will the take-over jeave Mr Cudlipp? His main title will be Deputy Chairman (Editorial) of the reconstituted Reed board. But he will still be chairman of IPC and of a company within IPC made up of the Daily Mirror and the other papers at present owned by irc. The joint Reed-tPc statement talked about setting up four main operating divisions, printing and publishing being one, 'which would maintain a high degree of autonomy. The separate identity of 1PC would therefore be assured and its leading position in the publishing world with complete security of editorial freedom will be continued'.

So things look a little rosier for Mr Cud- lipp. Or do they? Suppose the losses of the printing division continue? Suppose Mr Cudlipp's famous flair, which has recently come under suspicion. after the fiasco of the old Sun and the new Mirror Magazine, has deserted him, if only temporarily? Would he then survive long under Mr Ryder? One is entitled to doubt.