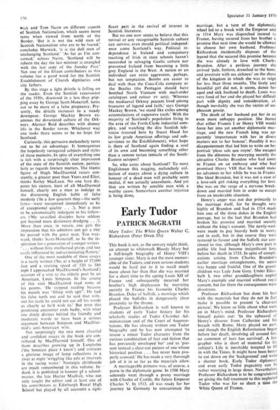 This book is not, as the unwary might think, an attempt to whitewash Bloody Mary but a full-length biography of Henry' VIII's younger sister. Mary is not the most memor- able of the Tudors, and even serious students would be hard put to it to recall much more about her than that she was married for a short time to the ageing Louis XII of France and subsequently incurred her brother's high displeasure by marrying secretly in France his favourite Charles Brandon, Duke of Suffolk, a marriage which placed the Suffolks in dangerously close proximity to the throne.

Professor Richardson is well known to students of early Tudor history for his scholarly studies of Tudor Chamber Ad- ministration and of the Court of Augmen- tations. He has already written one Tudor biography and he has now attempted `to rescue a minor Tudor character from the curious combination of fact and fiction that has previously enveloped her' and to 'pre- sent instead a clear-cut picture of one whose historical position . . . has never been pro- perly assessed.' He has made a very thorough job of it in so far as the materials allow.

A marriageable princess was, of course, a pawn in the diplomatic game. In 1508 Mary solemnly went through a proxy marriage with Charles of Castile, the future Emperor Charles V. In 1513, all was ready for her journey to Germany to consummate the

marriage, but a turn of the diplomatic wheel led to a break with the Emperor and in 1514 Mary was dispatched instead to France, having secured from her brother a promise that next time she would be allowed to choose her own husband. Professor Richardson incidentally disposes of the legend that she secured this promise because she was already in love with Charles Brandon. After a perilous journey she arrived 'pale, forlorn, drenched to the bone, and prostrate with sea sickness' on the shore of the kingdom in which she was to reign for less than three months. The lively and beautiful girl did not, it seems, dance her aged and sick husband to death. Louis was very fond of her and she played her difficult part with dignity and consideration, al- though inevitably she was the victim of un- pleasant gossip.

The death of her husband put her in an even more unhappy position. She feared that either Francis I or Henry VIII would force her into yet another diplomatic mar- riage, and the new French king was ap- parently 'importunate with her in divers matters not to her honour'. Possibly it was disappointment that led him to write on her portrait 'pleus sale que royne'. She escaped from the dilemma by marrying secretly the attractive Charles Brandon who had come to France on an embassy and who had promised Henry VIII that he would make no advances to her while he was in France.

She liked Brandon, but it was not a case of a love-sick girl risking everything for love. She was on the verge of a nervous break- down and married him in order to escape from an intolerable situation.

Henry's anger was not due primarily to the marriage itself, for he thought very highly of Brandon and had in 1514 made him one of the three dukes in the English peerage, but to the fact that Brandon had broken his promise and married secretly without the king's consent. The newly-weds were made to pay heavily both in worry and in cash, but in due course they were restored to favour and the Suffolk star con- tinued to rise, although Mary's own part in public life had become insignificant long before her death in 1533. In spite of compli- cations arising from Charles Brandon's earlier marriage entanglements, the union was happy and fruitful. One of the grand- children was Lady Jane Grey. Under Eliza- beth I, two other granddaughters copied Mary's example and married without royal consent, but for them the consequences were disastrous.

make it possible to present 'a clear-cut picture'. We know so little about what went on in Mary's mind. Professor Richardson himself points out: In the upheaval of Henry's divorce from Catherine and his breach with Rome, Mary played no part, and though the English Reformation began before her death, involving all around her, no comment of hers has survived'. A bio- grapher who is short of material for his subject's Life is inevitably tempted to fill in with the Times. It might have been better to cut down on the 'background' and write a shorter book. Early Tudor diplomacy and even early Tudor pageantry can be rather wearying in large doses. Nevertheless, Professor Richardson is to be congratulated on giving the full treatment to this neglected Tudor who was for so short a time the White Queen of France.