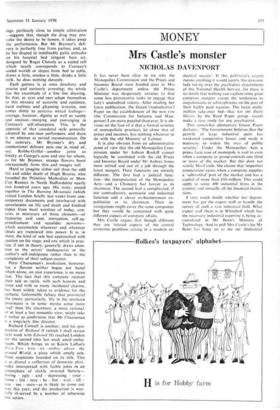 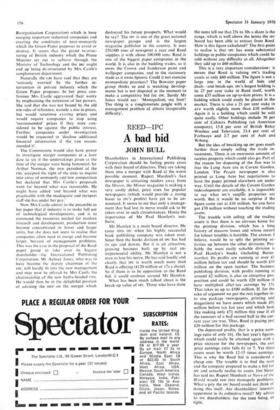 It has never been clear to me why the Monopolies Commission and the Prices and Incomes Board were handed over to Mrs Castle's department unless the Prime Minister was desperately anxious to find some less provocative tasks to engage that lady's undoubted talents. After reading her latest publication, the Green ('consultative') Paper on the establishment of the new cm (the Commission for Industry and Man- power) I am more puzzled than ever. It is ob- vious on the face of it that a formal scrutiny of monopolistic practices, let alone that of prices and incomes, has nothing whatever to do with the old Ministry of Labour.

It is also obvious from an administrative point of view that the old Monopolies Com- mission under Sir Ashton Roskill cannot logically be combined with the old Prices and Incomes Board under Mr Aubrey Jones (now retired and out of a job through the latest merger). Their functions are entirely different. The first had a judicial func- tion—the interpretation of the Monopolies Acts—and a Chancery bar lawyer as its chairman. The second had a complicated, if not contradictory, economic and industrial function and a clever ex-businessman ex- politician as its chairman. Their in- vestigations might cover the same companies but they would be concerned with quite different aspects of company affairs.

Mrs Castle argues that though different they are 'related aspects of the central economic problems arising in a modern in- dustrial society'. If this politician's jargon means anything it would justify this dynamic lady taking over the psychiatric departments of the National Health Service, for there is no doubt that nothing can explain some giant company mergers except the tendencies to megalomania or schizophrenia on the part of their highly paid tycoons. The latest multi- million take-over bid—that for MC Daily Mirror by the Reed Paper group—would make a case study for any psychiatrist.

This somewhat elementary Green Paper declares: 'The Government believes that the growth of large industrial units has weakened competitive forces and made it necessary to widen the area of public scrutiny'. Under the Monopolies Acts a prima facie case of monopoly is said to exist when a company or group controls one third or more of the market. But this does not satisfy Mrs Castle. She claims that 'imperfect competition' exists when a company supplies a 'substantial' part of the market and has a capital of more thati £10 million. This could apply to some 400 industrial firms in the country and virtually all the financial institu- tions.

I very much doubt whether her depart- ment has got the expert staff to handle the survey of such a vast industrial field. What expert staff there is in Whitehall which has the necessary industrial expertise is being ac- cumulated in Mr Benn's Ministry of Technology. And to pull Mrs Castle's leg Mr Benn has hung on to the tac (Industrial

H is for Hobby farm

destroy. It seems that the grand re-struc- turing of British industry which the Prime Minister set out to achieve through the Ministry of Technology and the IRC might end up being de-structured by Mrs Castle's conglomerate department.

Naturally the cm have said that they are `seriously worried' by the further in- tervention in private industry which the Green Paper proposes. In her press con- ference Mrs Castle aggravated their worry by emphasising the extension of her powers. She said that she was not bound by the old PIB rules of reference, namely a rise in prices, but would scrutinise existing prices and would require companies to stop using `recommended' prices if they were con- sidered to be against the public interest. Further, companies under investigation would be requested to `disclose additional financial information if the cm recom- mended it'.

The Commission would also have power to investigate merger companies at a later date to see if the undertakings given at the time of the merger were being honoured. Sir Arthur Norman, the new president of the cm, accepted the right of the state to inquire into areas of monopoly and low competition but declared that Mrs Castle's proposals went far beyond what was reasonable. He might have added `and beyond what was practicable with the inadequate and inexpert staff she has under her pay.'

Now Mrs Castle admits in the preamble to her paper that if industry is to make full use of technological developments, and is to command the resources needed for modern research and development, production must become concentrated in fewer and larger units, but she does not seem to realise that companies often need to merge and become larger, because of management problems. This was the case in the proposal of the Reed paper group to take over its biggest shareholder—the International Publishing Corporation. Mr Aubrey Jones, who was to have become the deputy chairman of the IPC, will hardly fit into the new management and may now be offered by Mrs Castle the chairmanship of the new hydra-headed cm. He would then be in the delightful position of advising the DEP on the merger which destroyed his future prospects. What would he say? The IPC is one of the great national newspaper groups and is the largest magazine publisher in the country. It uses 250,000 tons of newsprint a year and Reed supplies it with about 100,000 tons. Reed is one of the biggest paper companies in the world. It is also in the building trades, as it owns the Crown and Sanderson paint and wallpaper companies, and in the stationery trade as it owns Spicers. Could it not exercise monopolistic practices? The Bowater paper group thinks so and is watching develop- ments but is not disposed at the moment to make a competitive bid for IPC. Surely Mr Jones would say: `Monopolism, my foot! The thing is a conglomerate jungle with a management problem of almost insuperable difficulty'.