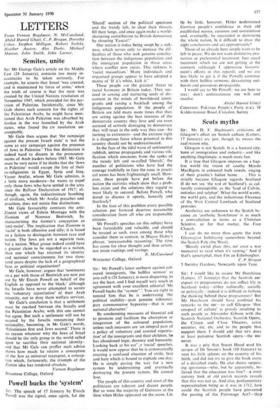 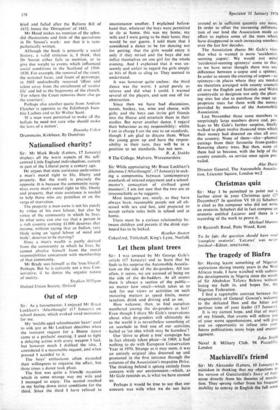 Sir: Mr D. F. Huchison's criticisms of Glasgow's effect on Scotch culture (Letters, 17 January) are just, though he misses the real reason why.

Glasgow is not Scotch. It is a bastard city, born of immigration and industry—and like anything illegitimate, is much more fun.

It is true that Glasgow imposes on a hap- less world the vision of couthy Murdo MacBigots in coloured bath towels, singing of their grannie's hielan hame . . . This is strictly because Glasgow regards Scotland (I do not say 'the rest of Scotland'), as cul- turally contemptible, as the 'land of Calvin, oatcakes and sulphur'. What the world wants, the world gets, and the industrious Florence of the West Central Lowlands of Scotland provides.

Aesthetics are unknown to the Scotch be- cause an 'aesthetic Scotchman' is as much a contradiction in terms as a Christian Scientist, or for that matter, the Free Church.

I can do no more than quote the irate Glaswegian holidaying somewhere beyond the Scotch Pale (the West).

'Bloody awful place this, no' even a war memorial to read when it's raining.' And if that's apocryphal, then I'm an Edinburgher. C. P. Brogan 5 Swinley Gardens, Newcastle upon Tyne

Sir: I would like to assure Mr Hutchison (Letters, 17 January) that the Scottish BBC export TV programmes do not reflect life in Scotland today—either culturally, socially or politically—indeed it is difficult to fathom the thinking behind these programmes! But Mr Hutchison should have confined his remarks to the mic—to call Glasgow 'that cesspool of culture' is grossly insulting to such people as Alexander Gibson with the Scottish National Orchestra, Scottish Opera, the Citizen and Close Theatres, artist societies, etc, etc, and to the people that suppbrt them. I should add that sry does at least patronise Scottish opera—the BBC never.

It was a pity that Stuart Hood used his review of Dr Smout's book (10 January) to vent his little spleens on the country of his birth, and did not try to give the book more of a detached study. He also shows surpris- ing ignorance—who, but he apparently, be- lieved that the education was free? —a most cursory look at old parish records reveals that this was not so. And also, parliamentary representation being as it was in 1712, how could the Scottish people have prevented the passing of the Patronage Act?—they

Mr Hood makes no mention of the splen- did illustrations and little of the quotations in Dr Smout's work : nor that it is sym- pathetically written.

Although the book is primarily a social history, a valid criticism is, I think, that Dr Smout either fails to mention, or to give due weight to events which influenced social conditions in the Scotland of 1560- 1830. For example, the removal of the court, the national focus, and fount of patronage, in 1603 undoubtedly removed 'effort and talent away from the enrichment of secular life' and led to the hegemony of the church. 'For where the Court removes there also go the courtiers'.

Perhaps also another quote from Andrew Fletcher is apposite to the Edinburgh Jaco- bite Lachies and to Sir Walter Scott.

'If a man were permitted to make all the ballads he need not care who should make the laws of a nation'.