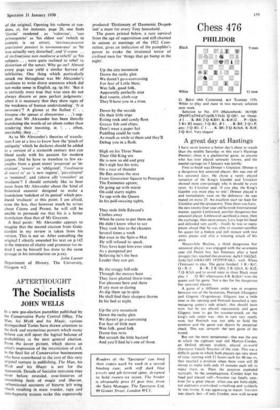 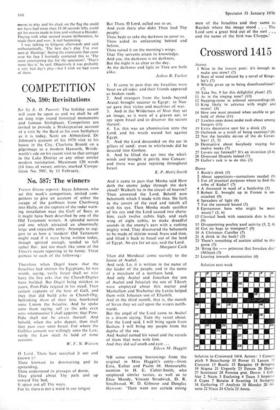 A great day at Hastings

I have never known a better day's chess to watch than the middle Saturday in this year's Hastings Premier; chess is a gladiatorial game, as anyone who has ever played seriously knows, and the mental carnage on 3 January was terrific.

First to finish was Drimer v Unzicker. Drimer is a dangerous but unsound player; this was one of his unsound days. He chose a rarely played variation of the King's Gambit and Unzicker showed most convincingly why it should be even rarer. As Unzicker said. 'if you play the King's Gambit you must play to win'; Drimer played it and immediately went on the defensive—he was mated on move 25. An excellent start (at least for Unzicker and the spectators). Then there was Levy. the new twenty-four year old Scottish International master, against Littlewood, another dangerous but unsound player. Littlewood sacrificed a piece, then the exchange. then more pieces; Levy kept his head and defended very coolly—finally he was so many pieces ahead that he was able to counter-sacrifice his queen for a bishop and still remain with two extra pieces and also a winning attack of his own.

Meanwhile Medina, a third dangerous but unsound player, was engaged with the seventeen year old Dutch boy Jan Timman; after a hard struggle they reached this position: 4q I k 1/I bQ2p2/ 2n4p/5p2/ I rRR4/6PI P2PP I P/6K I. with White (Timman) to play. The game finished: 1 R x Kt!,

A game of a different order was in progress between two of the favourites, Portisch (Hungary) and Gligoric (Yugoslavia). Gligoric lost a little time in the opening and Portisch launched a very menacing queen's side attack; this should have won. but he too played inaccurately and gave Gligoric time to get his counter-attack on the king's side under way—this in turn very nearly won, but Portisch was lust able to hold the position and the game was drawn by perpetual check. This was certainly the' oest game of the round.

But not the most sensational—this was the one in which the eighteen year old Martyn Corden, an Oxford physics student, played ex-world champion Vassily Smyslov of the USSR. This was a difficult game in which both players ran very short of time; starting with 23 hours each for 40 MO-TS, they reached a position when there were still 20 moves to make with only 15 minutes each left to make them in. Then the position exploded tactically. In the complications, Corden kept his head and played well—Stnyslov (so fatally easy. even for a great player when you are forty-eight, not eighteen) overlooked something and suddenly he was losing. It was agonising to watch: Sinyslov was clearly lost—if only Corden. now with several

moves to play and his clock on the flag (he could not have had more than 15-30 seconds left), could get his moves made in time and without a blunder. Playing with what seemed insane deliberation, he made them and won. A real happening.

I was talking to Gligoric afterwards and said enthusiastically, 'The best day's play I've ever seen at Hastings. Seeing the expression that came over his face I hurriedly corrected this to 'The most entertaining day for the spectators'. 'That's more like it,' he said. Objectively it was probably a very bad day's play—but I wish we had more of them.