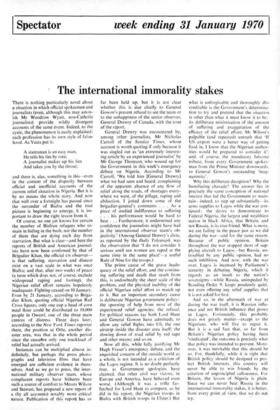 There is nothing particularly novel about a situation in which official spokesmen and journalists (even, although this may aston- ish Mr Woodrow Wyatt, non-Catholic journalists) provide wildly divergent accounts of the same event. Indeed, to the cynic, the phenomenon is easily explained: each profession has its own style of false- hood. As Yeats put it: A statesman is an easy man, He tells his lies by rote; A journalist makes up his lies And takes you by the throat; and there is, alas, something in this—even in the context of the disparity between official and unofficial accounts of the current relief situation in Nigeria. But it is by no means the whole story. And now that well over a fortnight has passed since the surrender of Biafra and the true picture is beginning to emerge, it is im- portant to draw the right lesson from it.

Of course, no one yet knows for certain the number of Biafran refugees who re- main in hiding in the bush, nor the number of them that are dying each day from starvation. But what is clear—and here the reports of British and American journal- ists have now been confirmed by that of Brigadier Khan, the official UN observer— is that suffering, starvation and disease exist on a vast scale in what was once Biafra; and that, after two weeks of peace (a term which does not, of course, exclude widespread raping and looting), the Nigerian relief effort remains hopelessly inadequate. Fighting ceased on 10 January. Even by 21 January, according to Briga- dier Khan, quoting official Nigerian Red Cross figures, only one cup a head of corn meal flour could be distributed to 18,000 people in Owerri, one of the three main centres of distress. Three days later, according to the New York Times reporter there, the position at Orlu, another dis- aster area, was that in the whole period since the ceasefire only one truckload of relief had actually arrived.

Instances can be multiplied almost in- definitely, but perhaps the press photo- graphs and television films that have emerged are sufficient evidence in them- selves. And as we go to press, the inter- national military observer team, whose complacent reports have hitherto been such a source of comfort to Messrs Wilson and Stewart, has prepared a new report of a (by all accounts) notably more critical nature. Publication of this report has so far been held up, but it is not clear whether this is due chiefly to General Gowon's present refusal to see the team or to the unhappiness of the senior observer, General Drewry of Canada, with the tone of the report.

General Drewry was encountered by, among other journalists, Mr Nicholas Carroll of the Sunday Times, whose account is worth quoting if only because it was singled out as 'an extremely interest- ing article by an experienced journalist' by Mr George Thomson, who wound up for the Government in this week's emergency debate on Nigeria. According to Mr Carroll, 'We told him [General Drewry] what we had seen and heard, complaining of the apparent absence of any flow of relief along the roads, of shortages every- where we went, of the pillage, raping and abduction. I jotted down some of the brigadier-general's comments . . . As a piece of studied indifference to suffering . . . his performance would be hard to beat . . . Furthermore, it undermined any confidence the journalists might have had in the international observer team's ob- jectivity.' (Among General Drewry's dicta, as reported by the Daily Telegraph. was the observation that 'I do not consider it serious until ten women are raped at the same time in the same place'—a useful Rule of Nine for the troops.) The prime cause of the grave inade- quacy of the relief effort, and the continu- ing suffering and death that result from this, is undoubtedly the sheer scale of the problem, and the physical inability of the official Nigerian relief effort to match up to it. But an important secondary cause is deliberate Nigerian government policy : the spurning of help from most of the experienced relief agencies; the refusal.

for political reasons (as both Lord Hunt and General Gowon have admitted), to allow any relief flights into Uli. the one airstrip inside the disaster area itself: the slowing down of road relief by red tape and other means; and so on.

Now all this, while fully justifying Mr Hugh Fraser's emergency debate, and the anguished concern of the outside world as a whole, is not intended as a criticism of the Lagos regime. It is no doubt perfectly true. as Government apologists have claimed, that other civil war victors, in Europe and America, have behaved even worse. (Although it was a trifle far- fetched for Lord Hunt to compare, as he did in his report, the Nigerian troops in Biafra with British troops in Ulster.) But what is unforgivable and thoroughly dis- creditable is the Government's determina- tion to try and pretend that the situation is other than what it must know it to be: its deliberate minimisation of the amount of suffering and exaggeration of the efficacy of the relief effort; Mr Wilson's palpable (and repeated) untruth that 'If Uli airport were a better way of getting food in, I know that the Nigerian author- ities would be prepared to consider it'; and, of course, the mandatory fulsome tribute, from every Government spokes- man from the Prime Minister downwards. to General Gowon's outstanding 'mag- nanimity'.

Why this deliberate deception? Why the humiliating charade? The answer lies in precisely the same conception of national interest that led the Government to main- tain—indeed, to step up substantially—its arms supplies to Lagos while the war con- tinued : the desire to demonstrate to Federal Nigeria, the largest and wealthiest nation in black Africa, that Britain, and not Russia, is its true friend. What is more. we are failing in the peace just as we did during the war—and for the same reason. Because of public opinion. Britain throughout the war stopped short of sup- plying aircraft to Lagos—but Russia. un- troubled by any public opinion, had no such inhibition. And now, with the war over. Lagos is incensed by Parliament's temerity in debating Nigeria, which it regards as an insult to the nation's sovereignty—while Russia. unimpeded by Standing Order 9. keeps prudently quiet. not even offering any relief supplies that it is not asked for first.

And so, in the aftermath of war as during the war itself, it is Russian influ- ence and not British influence that grows in Lagos. Fortunately, this probably does not greatly matter—except to the Nigerians, who will live to regret it. But it is a sad fact that. so far from Britain's Nigerian policy having been `vindicated', the outcome is precisely what that policy was intended to prevent. More- over, it was inevitable that this should be so. For, thankfully, while it is right that British policy should be designed to pro- tect British interests, this country will never be able to win friends by the criterion of unprincipled callousness. For Britain. the lesson of Nigeria is plain. Since we can never beat Russia in the international immorality stakes, it is better, from every point of view, that we do not try.