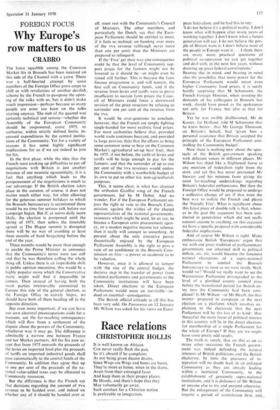 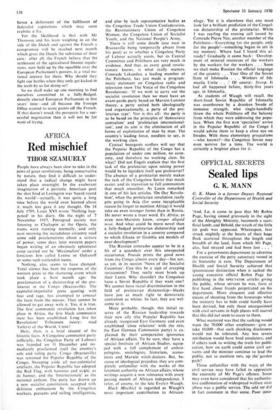 Why Europe's row matters to us

The latest squabble among the Common Market Six in Brussels has been received on this side of the Channel with a yawn. There was a half-hearted attempt by some members of the Foreign Office press corps to chill us with revelations of another devilish, scheme by the French to postpone the open- ing of the talks with us, but it didn't make much impression—perhaps because so many people are none too keen on the talks starting anyway. The nub of the quarrel was certainly technical and remote—whether the Assembly of the European Community should be empowered, come 1975, to authorise, within strictly defined limits, in- creased expenditures by the central institu- tions of the Community. Yet for a variety of reasons it has some highly significant implications for us if we are indeed to join the Six.

In the first place, while the idea that the French were cooking up difficulties to put off negotiations with Britain is just another instance of our neurotic egocentricity, it is a fact that anything which leads to the postponement of the negotiations is much to our advantage. If the British election takes place in the autumn, of course, it does not matter much either way, for after allowing for the geherous summer holidays to which the Brussels bureaucracy is accustomed there would be no time for serious talk before our campaign began. But if, as seems daily more likely, the election is postponed until the spring of 1971, then unless the timetable agreed at The Hague summit is disrupted there will be no way of avoiding at least three months of hard bargaining before the end of the year.

Three months would be more than enough to enable the Prime Minister to announce that the Community's terms were too stiff and that he was therefore calling the whole thing off. Unless there is an improbable shift in public opinion meantime, this would be a highly popular move which the Conservative party might well find it impossible to contest. Then instead of having both the main parties irretrievably committed to Europe this side of the general election, as the Foreign Office so naively hopes, we should have both of them heading off in the opposite direction.

But even more important, if we can leave our own electoral preoccupations aside for a moment, are the far-reaching consequences which will flow from a settlement of the dispute about the powers of the Community, whichever way it may go. The difference is admittedly a narrow one between France and her Market partners. All the Six now ac- cept that from 1975 onwards the proceeds of the levies on imported food plus the proceeds of tariffs on imported industrial goods shall

pass automatically to the central funds of the Community. In addition they agree that up to one per cent of the proceeds of the na- tional value-added taxes may be allocated to Community resources.

But the difference is that the French say that decisions regarding the amount of TVA revenue to be harided over, and indeed on whether any of it should be handed over at all, must rest with the Community's Council of Ministers. The other members, and particularly the Dutch, say that the Euro- pean Parliament should be entitled to insist, if it feels so inclined, on handing over more of the TVA revenue (although never more than one per cent) than the Ministers are prepared to relinquish.

If the 'Five' get their way one consequence could be that the level of Community sup- port prices for the farmers might not be lowered as it should be—or might even be raised still further. This is because the farm finance programme is, and will remain, the first call on Community funds, and if the revenue from levies and tariffs were to prove insufficient to sustain farm prices the Coun- cil of Ministers could force a downward revision of the price structure by refusing to surrender one per cent of the revenue from the TVA.

It would be over-generous to conclude, however, that the French are simply fighting single-handed for more realistic food prices. For most authorities believe that, provided world trade continues buoyant, and provided (a large proviso, this) that the efforts to bring some common sense to bear on the Common Market's agricultural set-up bear fruit, then by 1975, if not before, the yield of levies and tariffs will be large enough to pay for the farmers, and that the surrender of up to one per cent of the TvA revenues would endow the Community with a worthwhile budget of its own to put to other (i.e. non-agricultural) purposes.

This, it seems clear, is what has alarmed the orthodox Gaullist wing of the French government, led by M Debra. And no wonder. For if the European Parliament en- joys the right to vote to the Brussels Com- mission, against the wishes of the elected representatives of the national governments, resources which might be used, let us say, to finance a European arms procurement agen- cy, or a modest negative income tax scheme, then it really will amount to something. At present about the only executive power theoretically enjoyed by the European Parliament Assembly is the right to pass a vote of no confidence in the Brussels Com- mission en bloc—a power so academic as to be valueless.

However, once it is allowed to tamper with the size of the central budget, the decisive step in the transfer of power from national parliaments and governments to the Community institutions will have been taken. Direct elections to the European Parliament would seem an inevitable—in- deed an essential—consequence.

The British official attitude to all this has been very odd. On Panorama on 12 January Mr Wilson was asked for his views on Euro-

pean federalism, and he had this to say : `I do not believe it's a political reality. I don't know what will happen after many years of working together. I don't know what a future generation will say. I do not believe the peo- ple of Britain want it. I don't believe most of the people in Europe want it ... I think there are many more practical questions of political co-operation we can get together and deal with, in the next few years, without drawing up great federal constitutions.'

Bearing this in mind, and bearing in mind also the possibility that more power for the European Parliament would mean even higher Community food prices, it is surely hardly surprising that M Schumann, the French Foreign Minister, when resisting the demands of his colleagues in Brussels last week, should have posed as the spokesman not only for France, but also as that for Britain.

Yet he was swiftly disillusioned. Mr de Koster, for Holland. told M Schumann that

he knew better: that Mr George Thomson, on Britain's behalf, had 'given him a personal assurance that Britain accepted the principle of the European Parliament con- trolling the Community budget'.

Now there is nothing new about the spec- tacle of the British government speaking with different voices in different places. Mr Wilson has shied like a frightened horse at any mention of federalism right from the start, and yet this has never prevented Mr Stewart and his minions from giving the most far-reaching undertakings regarding Britain's federalist enthusiasms. But then the Foreign Office would be prepared to undergo a collective change of sex if that were the best way to isolate the French and please

the 'friendly Five'. What is significant about this latest piece of double-talk is that, where-

as in the past the argument has been con- ducted in generalities which did not really commit anyone to anything, on this occasion we have a specific proposal with considerable federalist implications.

And of course Mr Wilson is right. Many enthusiastic British 'Europeans' argue that we, with our great tradition of parliamentary government, our inherited skill in political debate, etc, etc, would become the foremost

natural champions of a supra-national

Parliament to control the Brussels bureaucracy as soon as we were inside. Well, would we? Would we really want to see the

before the transitional period for British en- try into the Community had been com- pleted? Is Mr Wilson—or Mr Heath, for that matter—prepared to campaign at the next election on a platform which involves ex- plaining to the electorate that the next Parliament will be the last of its kind : that thereafter the main focus of political interest in this country will lie in the direct elections for membership of a single Parliament for the whole of Europe? If they are we might have some pretty odd results.

The truth is, surely, that on this as on so many other occasions the French govern- ment was indeed defending the natural interests of British politicians and the British electorate. In time the pressures of in- tegration will no doubt lead, in an enlarged Community as they are already leading within a restricted Community, to the establishment of genuinely supra-national institutions, and it is dishonest of Mr Wilson or anyone else to try and pretend otherwise. But the enlargement of the Community will require a period of assimilation first, anSirr hence a deferment of the fulfilment of federalist aspirations which may seem realistic a Six.

Yet the likelihood is that with Mr Thomson and his team weighing in on the side of the Dutch and against the French a compromise will be reached next month which gives the Dutch the substance of their case: after all, the French believe that the settlement of the agricultural finance regula- tions, now held up by the squabble over the European Parliament's powers, is a vital na- tional interest for them. Why should they fight our battles when they only get kicked in the teeth by us for doing so?

So we shall wake up one morning to find ourselves committed to a fully-fledged, directly elected European Parliament in five years' time—and all because the Foreign Office wanted to score points off the French. If that doesn't wreck the prospects for a suc- cessful negotiation then it will not be for want of trying.