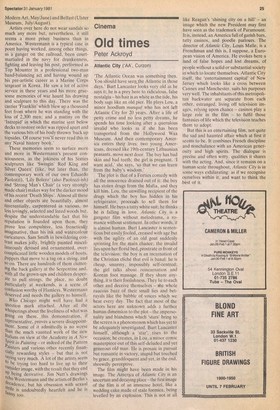 Atlantic City ('AA', Curzon) 'The Atlantic Ocean was something then. You should have s.emthe Atlantic in those days.' Burt Lancaster looks very old as he says it; he is a prey here to 'ridiculous, false nostalgia— his hair is as white as the tide, his body sags like an old pier. He plays Lou, a minor hoodlum manque who has not left Atlantic City for 20 years. After a life of petty crime and no less petty dreams, he spends his time looking after a querulous invalid who looks as if she has been transported from the Hollywood Wax Museum. And then contemporary America enters theistlives: two young Americans, dressed like 19th-century Lithuanian, peasants, move next door. The boy has bad skin and had teeth; the girl. is pregnant. 'I want acid,' she says, 'so that we can learn from the baby's wisdom.'

The plot is that of a Forties comedy with all the innocence drained out of it: the boy has stolen drugs from the Mafia, and they kill him. Lou, the unwilling recipient of the drugs which the boy has hidden in his refrigerator, proceeds to sell them for himself. He buys a tatty white suit:he thinks he is falling in love. Atlantic City is a gangster film without melodrama, a romance without sentiment. In other words, it is almost human. Burt Lancaster is sententious hut easily fooled, creased with age, but with the agility of an old goat suddenly sprinting for the main chance; the invalid lies upon her florid bed, prostrate in front of the television; the boy is an incarnation of the Christian cliché that evil is banal: he is cheap, smarmy, impossibly self-centred; the girl talks about reincarnation and Korean foot massage. If they .share anything, it is their foolishness. They lie to each other and deceive themselves — the whole raucous buzz of their small lies and betrayals like the babble of voices which we hear every day. The fact that most of the actors here are unknown adds a further human dimension to the plot — the impersonality and blandness which 'stars'. bring to the screen is a phenomenon which has yet to be adequately investigated. Burt Lancaster himself, although a 'star', rises to the occasion; he creates, in Lou, a minor comic masterpiece out of this self-deluded and yet generous old man, He is prosaic in pursuit but romantic in victory, stupid but touched by grace, grandiloquent and yet, in the end, shrewdly perceptive.

The film might have been made in his image. The America of Atlantic City is an uncertain and decaying place — the first image of the film is of an immense hotel, like a wedding cake made of stale formica, being levelled by an explosion. This is not at all like Reagan's 'shining city on a hill' — an image which the new President may first have seen as the trademark of Paramount. It is, instead, an America full of garish bars, tatty casinos, and poodle parlours. The director of Atlantic City, Louis Malle, is a Frenchman and this is, 1 suppose, a European vision of America. He evokes here a land of false hopes and lost dreams, of people without a solid or substantial society in which to locate themselves, Atlantic City itself, the 'entertainment capital' of New Jersey which looks like a cross between Cannes and Manchester, suits his purposes very well. The inhabitants of this metropolitan backwater are separate from each other, estranged, living off television images, relying upon chance — casinos play a large role in the film — to fulfil those fantasies of life which the television teaches them to adopt.

But this is an entertaining film, not quite the sad and haunted affair which at first it seems to be. It combines French discipline and nonchalance with an American generosity and high spirits. The dialogue is precise and often witty, qualities it shares with the acting. And, since it remains on a human scale throughout. Atlantic City is in some ways exhilarating: as if we recognise ourselves within it, and want to think the .best of it.