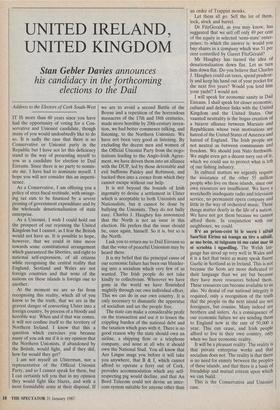 his candidacy in the forthcoming elections to the Dail

Address to the Electors of Cork South-West IT IS more than 60 years since you have had the opportunity of voting for a Con- servative and Unionist candidate, though many of you would undoubtedly like to do so. It is sadly the case that there is no Conservative or Unionist party in the Republic but I have not let this deficiency stand in the way of presenting myself to you as a candidate for election to Dail Eireann. Since there is no party to nomin- ate me, I have had to nominate myself. I hope you will not consider this an imperti- nence.

As a Conservative, I am offering you a policy of strict fiscal rectitude, with swinge- ing tax cuts to be financed by a severe pruning of government expenditure and by the wholesale denationalisation of state enterprise.

As a Unionist, I wish I could hold out the prospect of our rejoining the United Kingdom but I cannot, as I fear the British would not have us. It is possible to hope, however, that we could in time move towards some constitutional arrangement which guaranteed the liberties, and right to national self-expression, of all citizens while recognising the central reality that England, Scotland and Wales are not foreign countries and that none of the nations on these islands is foreign one to another.

At the moment we are so far from recognising this reality, which all of you know to be the truth, that we are in the gravest danger of converting Ulster into a foreign country, by process of a bloody and horrible war. When and if that war comes, it will not confine itself to the territory of Northern Ireland. I know that this a question which exercises you because many of you ask me if it is my opinion that the Northern Unionists, if abandoned by the British, would fight, and if they did, how far would they get?

I am not myself an Ulsterman, nor a representative of the Official Unionist Party, and so I cannot speak for them, but I can certainly tell you that in my opinion they would fight like blazes, and with a most formidable army at their disposal. If we are to avoid a second Battle of the Boyne and a repetition of the horrendous massacres of the 17th and 18th centuries, made more horrible by 20th-century inven- tion, we had better commence talking, and listening, to the Northern Unionists. We have not been very good at listening. By excluding the decent men and women of the Official Unionist Party from the nego- tiations leading to the Anglo-Irish Agree- ment, we have driven them into an alliance with the DUP, led by those detestable and evil buffoons Paisley and Robinson, and backed then into a corner from which they cannot escape without our help.

It is not beyond the bounds of Irish ingenuity to devise a settlement in Ulster which is acceptable to both Unionists and Nationalists, but it cannot be done by bullying the Unionists. They do not bully easy. Charles J. Haughey has announced that the North is not an issue in this election. He prefers that the issue should be, once again, himself. So it is, but so is the North.

I ask you to return me to Dail Eireann so that the voice of peaceful Unionism may be heard there.

It is my belief that the principal cause of our economic failure has been our blunder- ing into a socialism which very few of us wanted. The Irish people do not take kindly to collectivism. Wherever we have gone in the world we have flourished mightily through out own individual effort. This we can do in our own country. It is only necessary to dismantle the apparatus of socialism and set the people free.

The state can make a considerable profit on the transaction and use it to lessen the crippling burden of the national debt and the taxation which goes with it. There is no good reason why the state should own an airline, a shipping firm or a telephone company, and none at all why it should own the National Stud. You all know that Aer Lingus mugs you before it will take you anywhere, that B & I, which cannot afford to operate a ferry out of Cork, provides accommodation which any self- respecting pig would decline, and that An Bord Telecom could not devise an inter- com system suitable for anyone other than an order of Trappist monks.

Let them all go. Sell the lot of them, lock, stock and barrel.

Dr FitzGerald, as you may know, has suggested that we sell off only 49 per cent of the equity in selected 'semi-state' enter- prises; to which the answer is: would you buy shares in a company which was 51 per cent controlled by Garret FitzGerald? Mr Haughey has turned the idea of denationalisation down flat. Let us turn him down flat. Do you believe that Charles J. Haughey could cut taxes, spend prudent- ly and keep his hand out of your pocket for the next five years? Would you lend him your yacht? I would not. I will speak for economic sanity in Dail Eireann. I shall speak for closer economic, cultural and defence links with the United Kingdom and the United States. Our vaunted neutrality is the bogus creation of a bizarre alliance between Marxists and Republicans whose twin motivations are hatred of the United States of America and hatred of England. The Irish people are not neutral as between communism and freedom. We should join Nato forthwith. We might even get a decent navy out of it, which we could use to protect what is left of our fishing industry. In cultural matters we urgently require the assistance of the other 55 million people who live on these islands, since our own resources are insufficient. We have a wretchedly inadequate radio and television service, no permanent opera company and little in the way of orchestral music. These things matter dearly in the life of a nation. We have not got them because we cannot afford them. In conjunction with our neighbours, we could. B'e an priom-ceist bi le socrii i nDall SaorStat Eirinn na teanga na tire a sfiball,

ac mo br6n, ni tuigeann to mo caint mar to se scriobta i ngaedling. The Welsh lan- guage has stood up very well in Wales and it is a fact that twice as many speak fluent Gaelic in Scotland as in Ireland. This is not because the Scots are more dedicated to their language than we are but because they have more resources behind them. These resources can become available to us also. No denial of our national integrity is required, only a recognition of the truth that the people on the next island are not foreigners, but cousins. Many indeed are brothers and sisters. As a consequence of our economic failure we are sending them to England now at the rate of 50,000 a year. This can cease, and Irish people afford to live in their own country, only when we face economic reality. It will be a pleasant reality. The reality is that private enterprise works and that socialism does not. The reality is that there is no need for enmity between the peoples of these islands, and that there is a basis of friendship and mutual esteem upon which we can build.

This is the Conservative and Unionist case.